Bruton must legislate for religion classes outside school hours 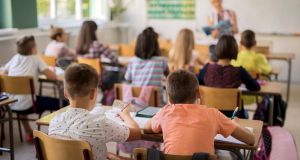 Faith formation in our taxpayer-funded schools must take place outside school hours. This allows parents to choose whether they want their child to receive religious instruction.

Would you be happy to know that for 30 minutes every day your five-year-old child will be made to sit alone at the back of the classroom while the rest of the class sings songs and interacts with one another? Would you be okay with it being like this every single day of their primary school education?

This is how it is for children from non-Catholic families in the vast majority of schools in Ireland. But, hey, they should just shut up and be thankful they got a place, right?

The Constitution says otherwise. Some 90 per cent of primary schools in Ireland are run by the Catholic Church, despite the fact they are funded by taxpayers. The Constitution explicitly sets out “the right of any child to attend a school receiving public money without attending religious instruction at that school”.

But the way in which Catholic schools pay lip service to this right is to shunt the offending children to the back of the class every day during faith formation and give them mindless busy work. This is disgraceful on two counts: first, it blatantly stigmatises innocent children and reinforces that stigmatisation daily. Second, the child remains present throughout the lesson and may absorb every word anyway.

According to the CSO, in 1990 93 per cent of marriages were Catholic and 4 per cent were non-religious. By 2017 the figures were 51 per cent Catholic, 37 per cent non-religious. This indicates what adults freely choose when the State offers no particular benefits based on that decision. Yet daily life in our schools remains dominated by a single religion.

The solution is not greater choice of schools – this, in essence, ultimately means a hyper-segregated education system with schools provided for every religion in the audience. It’s both logistically impossible and socially backward. Besides, the constitutional right not to attend religious instruction was clearly drafted precisely because an inclusive, non-segregationist education system was envisaged.

No, the answer is for the teaching of religious faith formation in our taxpayer-funded schools to take place outside school hours. This allows all parents to choose whether they want their child to receive religious instruction in the school setting.

The United States supreme court has been dealing with these issues for a very long time. In Abington School District v Schmepp (1963), the court stated that the segregation of students during religious instruction “carried with it the imputation of punishment for bad conduct”. On the problem of opting out of classes held during the school day, it was noted that parents and children “may well avoid claiming their right and simply continue to participate in exercises distasteful to them because of an understandable reluctance to be stigmatised”.

In Lee v Weisman (1992), the court said prayers in public schools could be seen by non-believers as “an attempt to employ the machinery of the state to enforce a religious orthodoxy”. The court highlighted “the particular risk of indirect coercion”.

Minister for Education Richard Bruton needs to step up and legislate to ensure the practice of classroom segregation is ended. Like the Baptism barrier, there is no law forcing schools to act in this way – they choose to do so. The decision, therefore, cannot be left in their hands.

But statements emanating from the Department of Education are worrying. On the right not to receive religious instruction, a department spokesperson merely said “the department expects each primary school to facilitate this right”. Asked about the rules and guidelines the department issues on upholding this right and how it inspects compliance, the response was that it is “a matter for each individual school”.

This all seems to amount to a massive shoulder shrug from the Minister when it comes to the upholding of a crucial human right in the very institutions for which he is responsible. The evidence clearly shows that schools do not care about a child’s right not to receive religious instruction. This has to change and the Minister must lead – or does he really think we should just shut up and be thankful our child got a place? Surely the Department of Education cannot simply avert its eyes from 3,000 primary schools and say “none of our business”?

Legislation that moves the teaching of faith formation outside school hours must be passed – this respects the religious freedom of everyone and continues to allow children to receive faith formation at school, should their parents so wish. Who could object to that?

1 Bank leaked my loan request to family who tried to rip me off
2 Spread of coronavirus triggers European travel curbs
3 Why Sinn Féin will not call the State by its name
4 What evidence is there that the IRA still controls Sinn Féin?
5 Anti-social chants bringing sour note to schools rugby
Real news has value SUBSCRIBE