Brian Hayes: EU could disintegrate on back of migration policy failure

Serious tensions have broken out between several EU countries, most recently Germany and Austria 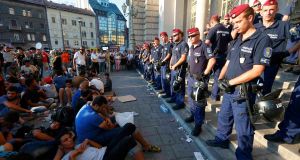 Be under no illusion; the EU sceptics see migration as an opportunity to break the EU. Photograph: Laszlo Balogh/Reuters

The refugee crisis is now the biggest challenge facing the EU. The failure of Europe to find agreement and to act decisively on the issue has the potential to dismantle the EU from within. Migration is central to the British referendum on EU membership. It is the toxic issue that within five years could bring the European Union to its knees.

The EU is built on four fundamental principles, one of which is the free movement of people. This is enshrined in the Treaties. Any diminution to the right of EU citizens to move freely across the EU could lead to the breakdown of the Schengen free travel agreement. Once you start limiting free movement, which could be an outcome of this crises - you start to unravel the EU. As the Slovenian prime minister Miro Cerar put it recently, “if we don’t deliver concrete action, I believe Europe will start falling apart”.

Very serious tensions have broken out between several EU countries, most recently between Germany and Austria. We have seen the erection of border fences between EU countries. Angela Merkel faces growing and vociferous opposition in Germany to her open approach to the refugee issue. If the flow of refugees and migrants into the EU continues at the current level into 2016 and beyond, the capacity of the EU to cope will be stretched to breaking point.

Be under no illusion; the EU sceptics see migration as an opportunity to break the EU. The latest eurobarometer of British opinion shows that migration is now the main issue of concern to British voters. If Britain leaves the EU others may well follow. Foot dragging on the issue by European politicians opens the door to the extremes. A heavy responsibility rests on the shoulders of the current generation of European politicians to respond to the ongoing crisis.

The debate so far in Europe is characterised by a failure of leadership; by a failure to act together; by a failure to properly engage with the scale of the crisis. Angela Merkel has shown an extraordinary willingness to confront the challenge of migration.

This issue will not go away just because the waters of the Mediterranean turn cold at the onset of winter. People will still come to Europe. They will find new routes and even more dangerous journeys to take.

Isn’t it rather ironic that the very leaders who challenged communism in Eastern Europe 25 years by tearing down walls, now want new walls and fences erected to stop people entering free Europe.

Europe is getting older, less competitive and emerging from the financial crisis at a much slower pace in comparison to the US. In any understanding of the real problems that confront Europe, from slowing growth to demographic pressures, it is obvious that the EU needs to attract people from outside of Europe to Europe. That’s either going to be done in a planned way or in a chaotic way, as is happening now.

Ireland is a case in point. Twenty years ago we had a labour force of 1.1 million people. That nearly doubled as the economy grew to two million people at work. The amazing turn around in Ireland’s economic performance, even with the economic crises, could not have happened without inward migration. If Europe wants the very social market economy continuing for future generations, then increasing our population is a crucial requirement.

I am not suggesting for a moment that we have an open door policy. That would be as irresponsible as doing nothing. But we must recognise that population growth in Africa over the next 30 years will see an additional billion people being born in that continent. That’s twice the size of Europe. By 2050 the population of Nigeria in 10 years could be over 400 million people. The pressures of population growth in other parts of the world will inevitably bring more people to Europe. We need to turn it to our advantage.

In Ireland we need a national conversation on migration and an honest discussion on our responsibilities as a rich country that has benefitted from EU membership. I welcome the government’s commitment, to take 4,000 people as part of the wider EU plan on resettlement programme. We should be prepared to review this number as the situation develops. Our own history of migration should encourage us to be generous. After the initial assessment, providing for the needs of refugees is best done at local level. Direct provision in large centres is bureaucratic, expensive and does not result in good outcomes.

I believe that each local authority in the country should now be tasked with establishing a refugee settlement committee. Under the direction of the local authority the resources of local communities, Church groups, voluntary groups and individuals willing to help could be effectively mobilized. While funding will be needed from central government, local effort and local engagement will result in better outcomes for all.

Europe needs to do a lot quickly on this issue.

- The move towards binding quotas for the resettlement programme must happen.

- A safe return policy has to be coordinated and paid for at a European level.

- More naval vessels are required and more support for Frontex is badly needed.

- We need to find a workable replacement to the Dublin convention which is no longer fit for purpose.

- Europe should work towards a common green card for migrant workers which would apply across the 28 member states.

- The EU must provide extra funding for the UN Refugee Agency so that support can be given in need of humanitarian aid.

- Plans to establish an EU border guard should also be advanced.

The EU is good at many things. That is especially the case when it comes to development aid and humanitarian relief. Europe leads where others follow. But on providing a pathway to citizenship of non-Europeans, we have failed miserably. Europe should not forget its own past of large scale displacement of people. The same values that brought Europe together after the second World War; tolerance, respect for diversity, freedom and effective multilateral action, are the values that Europe needs to show now.

The EU moves slowly; that is its nature. In contrast Germany’s response to the refugee crisis was swift and decisive. Germany adopted a can do attitude. Their decision to take so many refugees is a response to its own history but also a sign of its new place in the world. There are also economic reasons given Germany’s demography. But one thing is certain; its willingness to offer a home to the refugees from Africa and the Middle East is in stark contrast to the fortress mentality of many in Europe. We could learn a lot from their example. Responding with generosity is the right response from a humanitarian point of view and also the right response from an economic point of view.