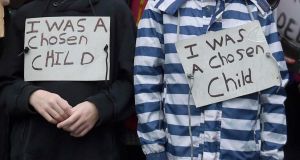 Chosen children: such a slogan screams that adults are all-powerful. They have the right to exclude others from even being defined as human. Photograph: Clodagh Kilcoyne/Reuters

The love of a mother for her baby is the most basic and unconditional form of love that there is. Of course, it is not just mothers. Most fathers would identify with the words of Richard Moore’s father on learning that his son had been blinded by a rubber bullet: can I give him my eyes?

The unconditional love babies receive is the basis for a secure life, knowing that, no matter what happens, we are valued and valuable.

No parent loves perfectly, but babies bring out a fierce protectiveness in us. The urge to protect the weakest and most helpless is primal.

Or at least it used to be. Now, participants in last week’s pro-choice march hang signs around children’s necks proclaiming, “I was a chosen child.”

The implications are chilling. “Chosen” has surface connotations of being special, but also the cold wind whispering in your ear: you could have just as easily not been chosen. Your siblings, your flesh and blood, may not have been chosen and therefore are absent forever from your life.

Such a slogan screams that adults are all-powerful. They have the right to exclude others from even being defined as human.

I don’t object to children being taken on marches, even marches that are held with the explicit intention of forcing the Government to allow women to deny the right to life to the next generation. I took my own children on pro-life marches.

Children attending marches is a way of passing on values. But if those values are that even a mother’s love is conditional, the radical insecurity that any child could just as easily have been un-chosen and that your right to life is completely dependent on being wanted, then surely there is a duty to consider the impact on your child?

Not an ideological choice

Perhaps because they are closer to the womb than we are, children find it harder to forget that we are all former foetuses. Although I took my children to pro-life marches, I told them that abortion was a word that they had to trust me to worry about and not to explain until they were much older.

Later on, when they were told that some women who are in really difficult circumstances feel that they cannot continue with a pregnancy, they were horrified. They never asked about methods of abortion. They did not need to. They just wanted to know why people did not help so the baby could get to live.

It is important to distinguish between ideologues who demand the right to end life, and women who face crisis pregnancies. An overlap exists, but research shows that the majority of women do not choose abortion for ideological reasons.

Irony of ironies: the alleged right to choose just leaves you alone with your misery, because you can always get rid of it, can’t you? There is no onus on society to help, or support, or care.

We already see the cost to women of presenting pregnancy as the ultimate burden, and the contents of the womb as less than human.

Instead of women being seen as beings with the amazing power to carry and nurture another human being, pregnancy is construed as being condemned to be a walking womb carrying a worthless clump of cells. And women have colluded in this so that smug men can continue to see themselves as the ideal.

Way to go, gals. What a wonderful way to reinforce patriarchy. Men can never become pregnant, so women have to imitate their limitation by becoming un-pregnant when they wish. They have gained nothing except the reclassification of one of women’s unique abilities as a crippling disadvantage. (And no, I don’t think becoming pregnant is the point of women’s existence. Try to read what I am actually saying instead of what you think I am saying.)

Feminists could have said, “Women get pregnant. Get over it. Change society so that it is never a nightmare.” But many chose instead to use dehumanising language to stigmatise the developing child as a mere clump of cells. We are all clumps of cells.

Any description designed to dehumanise a member of the human species is always a prelude to damaging or even destroying that individual. History proves that to be true.

Human rights depend on one thing only – common humanity. Once you make being human conditional on being wanted, you rip up the very basis of all such rights.

“Every child a chosen child” is a slogan that undermines not only human solidarity and unconditional love but also helps reinforce a patriarchal system where women are valued to the extent that they resemble men.