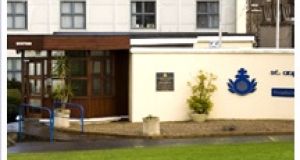 St Augustine’s school in Blackrock, Co Dublin is a co-educational school for children aged 8 to 18 who have mild general learning disability.

Something really excellent is being dismantled in order to prop up another service that is in trouble. This is in no small part due to underfunding and austerity measures. How often has that happened in the last eight to 10 years?

The latest example is particularly egregious because it involves people with special needs. St Augustine’s school in Blackrock, Co Dublin is a co-educational school for children aged eight to 18 who have a mild learning disability.

It was a fantastic model of integrated public services. Responsibility for funding the school lies with the Department of Education and Skills,but the HSE provided significant services as well, under the auspices of St John of God Community Services, Ltd (SJOGCS).

That link with St John of God began in the 1930s when, in the absence of other services, the brothers provided boarding school facilities for boys from all over the country.

Over the years, it was recognised that home is the best place for people with learning disabilities, and the school adapted its mission.

Seamless integration of health and education services not normally found together meant St Augustine’s could provide educational, social, recreational and vocational training programmes for about 165 students.

Integrating vocational training and social skills with academic work was pioneering. Parents raved about how it helped their children develop. In addition, there were speech therapists, psychologists and social workers on site.

Note the past tense. Some 19 staff, including childcare and social work personnel, are being redeployed into other adult and residential services for people with special needs this September.

So by July 2018, many of the features that made St Augustine’s a model of best practice will be gone. The school will continue to be excellent, but the integrated services that made it unique will have gone.

Naturally, there is consternation. Parents are devastated. Many of their children would not do well in a mainstream school even with special needs assistant (SNA) support, and that is why they chose St Augustine’s.

From the SJOGCS viewpoint, this decision was not taken lightly or callously. Since 2008, it has experienced cutbacks of some €12.5 million in the region that includes St Augustine’s, which encompasses parts of Dublin and Kildare.

SJOGCS say times have changed, and there has been an increase in St Augustine’s in supports such as SNAs provided by the Department of Education and Skills. At a time of urgent demand elsewhere, chief executive Claire Dempsey says, as part of the health service, it cannot afford to subsidise the department.

She says it is committed to working closely with the school’s board of management to ensure a smooth transition of the vocational development department. That’s all very well, but anyone who thinks the department will replace seven instructors and the other 19 posts is dreaming.

In a separate development unrelated to St John of God, under the HSE’s Progressing Disabilities Services initiative, six clinicians such as speech therapists working in the school will be redeployed into the community. The children will still be able to access these services, but as part of a long queue in another underfunded, understaffed service.

The St Augustine’s cutbacks were announced the same week as Minister for Children Katherine Zappone announced additional supports for preschool children with special needs, and Minister for Education Richard Bruton an increase in SNAs in mainstream schools. There is a stark disconnect between announcing supports in some areas, while vulnerable children suffer in other areas due to withdrawal of supports.

In a society that cared about its weaker members, the St Augustine’s model would be copied by all other special schools, and one would not be forced to choose between supporting St Augustine’s or adult services. Both would be supported.

The sad thing is that we often don’t care unless the service being damaged directly affects us. How short-sighted is that? If the Government is allowed to continually get away with damaging something that works well in order to prop up other vital services, eventually it affects us all.

1 Des Bishop apologises to Traveller community for comments in interview
2 One hundred Irish retailers for all your online Christmas shopping
3 How long can Government afford to keep State pension age at 66?
4 What I learned about male desire in a sex-doll factory
5 Gym owner plans to defy restrictions and open
Real news has value SUBSCRIBE