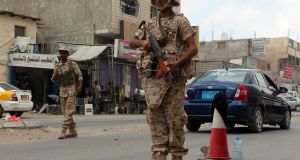 Loyalist forces stand guard on a main road in the Mansoura residential district of Yemen’s second city of Aden after they pushed Al-Qaeda out of parts of the city. Photograph: Saleh al-Obeidi/AFP/Getty Images

An Indian priest, Fr Tom Uzhunnalil, was reported to have been crucified by Islamic State in Yemen on Good Friday. The bishop for the area has said there is no evidence that this has happened.

People have been asked to desist from spreading the rumours, which are distressing both to the priest’s family and his religious order, the Salesians.

The story illustrates several perils of modern media, including the speed with which stories spread on social media.

The story did have some plausibility, given that the UN, among others, has confirmed reports of crucifixion-style executions by Islamic State, also known as Isis.

However, it is not even clear if Isis was responsible for the kidnapping.

Fr Tom was kidnapped in Yemen after unidentified gunmen went on the attack in a home for aged and disabled people, killing 16, including four religious sisters of the Missionaries of Charity, which runs the home.

The story of the alleged crucifixion spread on social media, not from any kind of sensationalism, but among Christians requesting prayers because they were worried about Fr Tom’s safety.

We are all familiar with how social media can be inaccurate, whether it be a tweet wrongly attributed to Sinn Féin in the last Irish presidential election campaign, or the fake videos purporting to show events in Brussels as the terrorist attacks unfolded.

Modern media can also be very selective in what it chooses to highlight.

The story about the 16 murders might not have even merited attention in western media were it not for the allegation that Fr Tom was to be crucified on Good Friday.

Just a week before the Brussels terrorist attacks, 106 people were killed by air strikes in a market in Mastaba, Yemen.

The Saudis are backing the current government against rebels, known as the Houthis, who are aligned with the former president, Ali Abdullah Saleh.

Similarly, a car bomb in Yemen that killed 37 people happened on the same day as the murders at the Charlie Hebdo offices, and we all know which incident garnered massive amounts of headlines.

The attack that killed 69 in Lahore, Pakistan, might not have gained as much attention, either, if it had not taken place on Easter Sunday.

There is a particular horror attached to attacks on the innocent on Good Friday and Easter Sunday, no matter how post-Christian we think our society has become.

However, in general, attacks against Christians are under-reported. More people are aware of the attacks on Yazidis than on Christians.

Mind you, many are also not aware that Isis and other terrorist groups target other Muslims more than they target any other group.

That is why it is important that John Kerry, US secretary of state declared last month that Isis is committing genocide against Christians, Yazidis and Shia Muslims in the areas it controls.

Ironically, the situation in Yemen has been exacerbated by the US selling more than $9 billion worth of arms to the Saudis in 2015 alone – but the declaration regarding genocide is vital, nonetheless.

It means it is no longer possible to downplay the nature of what is happening to Christians and other minorities.

Kidnappings are just one tactic. They are used as much to generate publicity as for ransoms.

When someone like Fr Tom is kidnapped, the situation is incredibly delicate. It is possible that whatever group is responsible might even decide to carry out the gruesome execution because of the publicity it would generate.

No details were released to media, including whether or not a ransom had been paid.

Which leads to another difficulty with the way in which media operate – when should you report, or to what degree should you engage in self-censorship?

Some elementary level of discretion should operate, but often does not.

For example, survivors of the Paris attacks sued, because news media reported their hiding places while the attackers were still on the loose, even down to declaring that a woman was hiding in a refrigerated area with her baby.

Our world is rife with ethical difficulties for media, about everything from what should get reported to when it should be reported, to how to compete with news breaking on social media, and still maintain standards such as fact checking?

And, sadly, commercial and other pressures mean that conversations about when it goes wrong, and how such mistakes might be prevented in the future, rarely happen.

Meanwhile, both prayers and strenuous diplomatic efforts will continue to be important for Fr Tom, in the hope that he will be successfully rescued.