Bloody Sunday: Paras were the wrong regiment in the wrong place 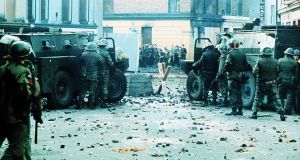 Bloody sunday in Derry 1972 when members of the parachute regiment opened fire on a banned Civil Rights march through the city. Photograph: William L Rukeyser

‘D-Day’, ‘Arnhem’, ‘The Falklands.’ Perhaps these place names and battle honours of The Parachute Regiment point to why the men of its 1st Battalion’s Support Company should not have been anywhere near Rossville Flats, Rossville Street, nor Glenfada Park on 30th January 1972.

That the elite, aggressive, fighting unit of the British army was used to contain a civil rights demonstration highlights poor judgement at the higher echelons of military command, a failure to recognise the innate ethos of paratroops, and poor tactical leadership by those paratroop leaders on the ground.

The Parachute Regiment were conceived and created in the world’s largest conflict, World War 2, as Britain’s shock troops, and have been used as such throughout their short history.

At one point in P Company, the Parachute selection course, candidates scream replies to the instructors’ calls: ‘Where do you want to go?’ “ARNHEM!” ‘What do you want to do?’ “KILL!” Such use of psychological conditioning techniques adds to the aggressiveness of paratroops vis a vis line infantry. They are some of the attributes that make them, man for man, some of the best conventional war fighters in the world today.

They are not the attributes that make them best suited to complex situations, such as containing protestors, especially when there are potentially armed gunmen operating on the peripheries and you have to make instant decisions about who poses a threat and who does not. In situations where there is high tension, the very real threat of injury or death and a complex and unclear operating environment, group dynamics and ethos become very important very quickly in determining the response of individuals in certain situations.

The fact that a number of the innocents shot on Bloody Sunday were not killed by new recruits who were scared and panicked, but by veterans of 3-5 years’ experience, shows how the aggressive ethos of the Parachute Regiment failed them when they were faced with conducting operations outside of conventional warfare. This is borne out by the facts that the soldier arrested yesterday in connection with the killings of William Nash, John Young and Michael McDaid, was a lance corporal, and the conclusion of the Saville Commission that neither he nor a colleague fired ‘in a state of fear or panic.’ Indeed, both soldiers were accused by Saville of lying in their subsequent testimony - itself an indication of a flawed command climate.

These problems also existed further up the chain of command. The failure of the overall land forces commander, Major General Robert Ford, to realise that this unit might not have been the right tool for the job of armed police was compounded by what the Saville Inquiry found was the ‘wrong direction’ given to Support Company by their Commanding Officer, Colonel Wilford. Indeed, such was the mismatch between the Paras ethos and their task that day that one Para officer who saw the unrest developing is rumoured to have commented ‘wrong regiment, wrong place’.

Moreover, the failure of the company’s leaders to rein their men in during half an hour of firing again points to this innate aggressive ethos, a lack of understanding of the necessity of minimum use of force in aid to the civil power missions, and poor tactical awareness. Leadership requires constant reiterating of the ground rules for acceptable behaviour in high threat situations. The Paras’ tactical leaders failed in this as it was contrary to their training and ethos.

Indeed, the overly aggressive stance taken on the Bogside and the massive implications this had on the social, political and military landscape in Northern Ireland has since fundamentally changed the British army’s approach to tackling civil unrest and counter insurgencies. My own education in the methods of counter insurgency and civil unrest policing are a direct result of the tragic and unjustifiable killings enacted 43 years ago.

Nevertheless, the Parachute Regiment, while much changed and well led, still remains subtly different from the rest of the British army in its ability to move up and down the violence spectrum, due to its training and organisational ethos.

Patrick Bury is a former Captain in The Royal Irish Regiment who served on operations with The Parachute Regiment; he is a member of the Military Ethics Education Network and a PhD candidate in military sociology.