Bahrain deserves a chance to prove itself on human rights

Engagement and assistance can bring change more effectively than a boycott 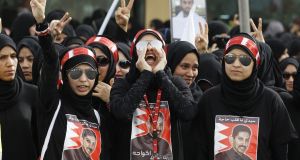 Protesters in Bahrain: the suggestion that the sharing of experience, best practice and skills should not happen until after the human rights issues have gone away doesn’t add up. Photograph: Hamad I Mohammed/Reuters

Bahrain’s record on human rights has been repeatedly criticised following the treatment of protesters in the wake of the “Arab Spring” of 2011.

Most recently, the human rights organisation Reprieve published a report last month asking calling for Northern Ireland to stop training security forces and ministry of the interior staff in Bahrain because of the countries “dire” human rights record.

While I respect the important work of Reprieve, I want to explain why, in this instance, I think that the organisation is wrong.

The Bahrain independent commission of inquiry was established in 2011 by the king, to determine whether the events of February and March 2011 involved human rights violations and to make recommendations. The ombudsman’s office was set up in direct response to one of the 26 recommendations made by the inquiry. The office was the first and remains the only one of its kind in the region.

I have worked in Bahrain both on UK foreign office funded projects and as an independent criminal justice adviser. Over the past three years, I have supported the development of operational and investigative procedures and the training of investigators in the Bahrain ombudsman office, under the overarching aim to support the delivery of a fair and just criminal justice system, with human rights at its core.

As a member of the Northern Ireland Policing Board and a former Northern Ireland prisoner ombudsman, if I learned anything, it was that context is everything when it comes to delivering change. There is a conflict in Bahrain, complicated by external, regional influences – and there is no Belfast Agreement. There are people who want change but would never engage in violence and there are others who believe that violence against the security forces is justified. While there are many in positions of authority who recognise the need for criminal justice reform and who are working hard to make progress, there are others who do not accept the need for change or struggle with it – particularly when police officers are killed by improvised explosive device. Sound familiar?

In such circumstances the process of change is complex and multifaceted. Parts of the system may make progress more quickly than others. But a policy of practical engagement and assistance can help to bring about change; the suggestion by some NGOs and human rights organisations that the sharing of experience, best practice and skills should not happen in Bahrain until after the human rights issues have gone away doesn’t add up. I and other overseas experts must always work to the highest standards of individual integrity and red lines must be recognised. But, while it is emphatically the case that experts must never provide cover where there is no intention whatsoever of addressing wrongdoing, that is not the case here.

Establishing the first ombudsman office in a challenging region, with no local directly relevant experience or pool of complaint investigators, was a big ask for the ombudsman. The ombudsman has the honesty to admit that mistakes have been made. It remains work in progress but three years on, the number of complaints received has increased by 395 per cent and important outcomes have been delivered. Children under 18 are no longer held in detention with adults; a new prison-build programme has begun; the use of CCTV in policing and places of detention has increased significantly and the ombudsman has been able to examine CCTV evidence proving alleged mistreatment within hours of receiving allegations; all police vehicles have unique identification numbers; progressively more detainees are accessing education.

I continue to support the efforts of the ombudsman office because I know that the ombudsman and his team are trying to do the right thing. And on balance, I believe we are right to continue sharing our Northern Ireland experience and skills in Bahrain.

Pauline McCabe was a member and committee chair of the Northern Ireland Policing Board for six years and the prisoner ombudsman for five years. She is a visiting professor at the University of Ulster faculty of social sciences, school of criminology, politics and social policy and a fellow of the Chartered Institute of Personnel and Development. She was awarded an OBE in 2014 for services to prisoners and criminal justice.