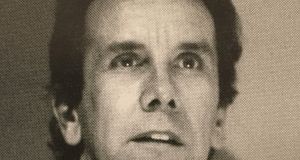 Choreographer and dancer Günther Falusy died on December 17th, aged 71. His dancing career began as a boy in his native Austria and took him to international stages, including Ireland, where he co-founded Ballet Ireland and was artistic director from 1998 to 2008. During his career he worked with some stellar names in 20th century ballet – Rudolf Nureyev, George Balanchine, Frederick Ashton and John Franko – dancing in classics and creating contemporary roles.

Falusy was born in Vienna to Karl and Leopoldine Falusy in 1946. His father was a specialist truck mechanic who managed a company that supplied trucks and spare parts. When his mother read a newspaper advertisement looking for children to take part in a production by Vienna State Ballet, she saw a way to channel her seven-year-old son’s boyish energy. He thrived, and at the age of 15 received his first contract with the company. Formative influences came from teachers Rosa Dirl, Adele Krausenecker, Gordon Hamilton and, in particular, Georgia Hiden, who he worked with later in America. Five years after joining Vienna State Ballet he was promoted to soloist and he spent 10 years dancing a wide repertoire of classics and new choreographies, touring throughout Europe and the United States. Some of his roles include “Paris” in Cranko’s Romeo and Juliet, “Müller” in Massine’s Three Cornered Hat, and parts in Grigorovich’s The Nutcracker and Balanchine’s The Four Temperaments.

In 1966, he starred in the company’s film production of Swan Lake, choreographed by Rudolf Nureyev. Featuring Nureyev and Margot Fonteyn in the leading roles, it is probably the most popular ballet film ever released. Working with Nureyev was inspirational, and the pair became friends and worked together later in 1977 in Munich. During his time with Vienna State Ballet he also danced annually in the Vienna Philharmonic’s New Year’s Concert, relayed through the Eurovision Network to millions of viewers.

He joined Bavarian State Ballet in Munich in 1976 and made guest appearances with Stuttgart Ballet, working with a broader range of choreographers, including for the first time, Peter Wright, Frederick Ashton and Kenneth MacMillan, Glen Tetley (artistic director in Stuttgart) and the Czech choreographer Jirí Kylián, a fellow dancer at Stuttgart. Ten years later, he left the Bavarian State Ballet to establish his own company, Wiener Ballet Theatre. Smaller in scale, this touring company took a mixed repertoire to mid-scale venues throughout Europe and provided an outlet for his growing interest in choreography, which was also featured in festivals at Interlaken, Munich and Salzburg.

That model was replicated when he moved to Ireland in 1997. Here, he co-founded Ballet Ireland with his then partner Anne Maher, presenting an inaugural performance at the Gaiety Theatre in 1998. Most valuably, it visited smaller provincial venues in Ireland and the UK not served by other ballet companies. For Ballet Ireland he choreographed full-length ballets like Swan Lake, The Nutcracker and Alice in Wonderland, and short pieces like Bamboo Spring, Verlorene Liebe, Cage and La Belle Epoque. He also collaborated with Morgann Runacre-Temple in creating Die Fledermaus and A Christmas Carol.

Irish audiences might not have seen him dancing in his prime, but Falusy took on some character roles in his own choreography. Clad in black he brought a menacing presence to Baron von Rothbart (Swan Lake), and in playing Herr Drosselmeyer (The Nutcracker) he forefronted the character’s darkness rather than portraying a benign uncle. However, his dancing is preserved on film. In addition to Nureyev’s Swan Lake, he also appeared in the Vienna State Ballet’s 1968 production of Coppélia and a 1970 TV short film of Peter and the Wolf, produced by ZDF in Germany.

He died peacefully in Mistlebach, Austria, after a short illness and is survived by his brother Manfred and niece Doris Falusy as well as his partner of 20 years Anne Maher from whom he had seperated some years ago.