For some EU is taking lead on global issue, others believe institution is overstepping mandate

European Competition Commissioner Margrethe Vestager rejects Apple's criticism that an EU order to the company to pay back taxes to Ireland is political, noting the calculations are based on facts and Apple's own data. Video: REUTERS 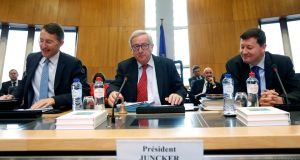 The emergence of an increasingly bellicose European Commission has borne out Jean-Claude Juncker’s pledge in 2014 that he would lead a more political commission. Photograph: Francois Lenoir/Reuters

The European Commission’s demand the Government recoups up to €13 billion in unpaid taxes from Apple may prove to be a watershed moment for Ireland’s relationship with the European Union.

Even during the dark days of the Irish bailout, Ireland’s loyalty to the EU project proved tenacious as suggested by successive polls from Eurostat.

The Apple judgment may undermine this long-standing support.

It is difficult to dispute that Ireland has been a facilitator of corporate tax avoidance for decades, building its economic model around low corporate taxation. Even during the punitive austerity of the bailout years when citizens were undergoing punishing tax and expenditure cuts, there was barely a whimper from the left about the glaring inequity at the heart of Ireland’s tax system. Other EU citizens looked on in puzzlement as Irish people took to the streets to protest about paying for water through charges, while blithely ignoring the profound moral and economic unjustness that allowed big companies to contribute little or no tax to the depleted exchequer.

But while Ireland’s corporate tax strategy needs to be reformed, the competition arm of the European Commission may not be the means to do that.

The Apple ruling has opened up a broader question troubling citizens across the bloc – has the EU exceeded its powers and gone too far as an institution?

The real significance of the Apple ruling is that it was issued by the EU’s competition division. The EU’s competition directorate-general, manned by 800 permanent staff, has long been the most powerful arm of the commission, exercising quasi-judicial powers in its ability to hand down and enforce judgments, usually in takeover and state aid cases.

In this sense it differs significantly from other aspects of EU law and policymaking. Typically in the labyrinthine EU legislative system , the European Commission proposes legislation which then must be approved by the European Council, which represents all 28 member states, and in some cases, the European Parliament. While on one level this convoluted system of policymaking is one of the frustrations of the EU, it is also one of its strengths as no EU law can be endorsed without EU member states – through their ministers or prime ministers – having a say, and in some cases, a veto.

The decision by the European Commission’s competition wing to investigate Ireland’s tax arrangements with Apple thus has particularly serious ramifications.

The allegation that the commission has overstepped its remit is an issue not just confined to Ireland. In recent months, other member states have privately expressed concern that Jean-Claude Juncker and his powerful chief-of-staff Martin Selmayr are exercising too much power over member states. One EU ambassador recounted how a prime minister from an east European state told the European Commission that if her country was forced to take one extra refugee under the commission’s relocation plan, her government would collapse.

Other, mostly smaller member states, have felt they are being pushed on red-line issues, such as Cyprus, which was forced to make concessions on relations with Turkey; or Croatia, which was furious about a recent commission decision on accession-state Serbia.

While the European Commission’s motives may be morally laudable – be it with a relocation plan for refugees or clamping down on tax avoidance in the Apple case – the salient question is whether it should have the power to override member states on matters that can have a profound impact domestically.

While for some the European Commission’s Apple ruling reveals an EU that has found its voice, and is taking a lead on a global issue, for others it is proof of an institution that is overstepping its mandate.

The emergence of an increasingly bellicose European Commission has borne out Juncker’s pledge in 2014 that he would lead a more political commission. But there is an argument that this should not be the function of the commission, which, as an executive body, is supposed to act as a quasi-civil service within the delicate balance of power between the three main EU institutions – the European Council, European Parliament and European Commission.

The question of the politicisation of the European Commission is particularly pertinent for Margrethe Vestager’s competition division, given its need for independence. The Danish commissioner refuted suggestions that the Apple finding was political, arguing that her directorate-general’s responsibility was to uphold state aid rules within the single market as set out in the EU treaties.

But given Juncker’s explicit strategy to make his commission more political, there is a valid question over whether the EU’s uniquely powerful competition division should be part of the commission at all or should be hived-off into a separate institution.

Ireland will be hoping that a clamp-down against multinational tax practices does not become the EU’s new focus as it tries to make itself relevant to an increasingly sceptical public.