Anne Harris: History will judge O’Reilly as a man of principle

While the former newspaper proprietor will always have his critics, his dedication to press freedom is unassailable 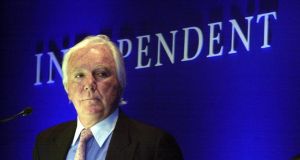 Tony O’Reilly: “If his commitment to free speech was merely a pose, the Sunday Independent gave plenty of opportunity to depose it.”

Tony O’Reilly had such a good press for so long that clawback was inevitable. Matt Cooper’s book The Maximalist has sparked many begrudging reviews. However, the book itself is fair to a man who was defined by dual loyalties: personal ambition and patriotism, business and ethics.

Some reviewers had agendas they did not declare. Words like charm and charisma, swashbuckler and showman were used freely but they are construed positively or negatively depending on your position on the O’Reilly pendulum. The problem with all of this is it misses one point: his seriousness. He is and was a man of principle. Certainly on the one principle that is necessary to the proper self-scrutiny of a nation: press freedom.

Ironically, it is a quote from Denis O’Brien in Cooper’s book which affords the best opportunity to illuminate the problematic concept of press freedom.

“If you look at the treatment, for example, of John Hume by the Sunday Independent during the early stages of the peace talks in Northern Ireland, ” says O’Brien, “it was an absolute disgrace, Here was a man who had devoted his life to the pursuance of peace on the island and he was vilified. It took a huge toll on his health. There were many others who were subjected to poisonous attacks. The coverage of Liam Lawlor’s death by the Sunday Independent was one of the lows of Irish journalism in my lifetime. And what was done about it? Absolutely nothing. No one was fired, no one was suspended. I think it is reasonable to assume that the board and management condoned such conduct by their lack of action.”

Two entirely separate issues have been conflated here: John Hume and the peace process was a debate; Liam Lawlor was a mistake.

What Hume, in the early stages of the peace process, did, was ask the Irish Republic to accept the IRA’s and Gerry Adams’s credentials on his say-so. The Sunday Independent, in sometimes furious debate, subjected those credentials to severe scrutiny. Twenty years later, those credentials are still clouded and the consequences for Northern Ireland are serious. Hume, I am sure, did find it hard. But the scepticism was essential to democratic discourse. Many of the Sunday Independent’s warnings have proved well founded and 20 years on the jury is still out on Adams’s true agenda.

Free speech is a newspaper in which one has the right to question – or negate – a value which is held to be a self-evident truth. O’Reilly backed his journalists when it was neither popular nor profitable. I believe this came from his own impalpable belief in democracy. At the same time, he proved his commitment to peace by setting up the Ireland Fund to deflect concerned Irish Americans from the IRA-backed Noraid.

Liam Lawlor was undoubtedly a more difficult one for him to suck up. Mistakes happen in business too, and doubtless Denis O’Brien has made some. To say that a lack of action from the board was in some sense condoning the Lawlor story is an odd – and ill-informed – interpretation. It was a job for the management.

But is it a bad thing to show loyalty to someone who made a mistake, however serious? Which is better: to look for blood or test the guts of the miscreants by showing implacable faith in their ability to atone?

Tony O’Reilly respected journalism and journalists. To the best of my knowledge, he did not interfere, either by commission or omission, in editorial matters. I reject the fiction peddled in some quarters that after a dinner with Bertie Ahern and Brian Cowen in early 2007, he caused the Sunday Independent to change tack on its political coverage of the forthcoming election. If this had happened, I would have heard of it. Because Aengus Fanning, our editor, was never one to keep his own counsel. For Aengus the editorial imperative – good stories – was paramount and would be the only reason for changing tack. O’Reilly respected his supreme commitment to the status of the story.

Perhaps he got more satisfaction from this than from his more philanthropic efforts. He never got much credit for the Ireland Fund. And most of the reviewers of Cooper’s book are unable to bring themselves to salute his titanic – and tragic – efforts to save Waterford Glass and its workers.

From his rugby comeback days, he is well aware that gratitude is the most difficult of emotions. Besides, for such a huge ego, he has proved surprisingly stoic in adversity.

His fall has been epic, but there has been no echoing the victim’s bleat.

Some would say the pity is he didn’t learn earlier the philosopher’s stone: “enough is enough”. But then, he wouldn’t have been Tony O’Reilly. And he might never have taken on Independent Newspapers. And when all is said and done, that, to my mind, would have been a real pity. History will be kinder to him than his critics.

1 Miriam Lord: Does anyone care if Leo smoked or snorted?
2 A vegetarian and a non-drinker visit Ireland: here’s their verdict
3 Child (4) died of viral infection following nap at Cork creche
4 Cycling or swimming, walking or yoga: What is the best exercise for you?
5 Man tested for symptoms linked to coronavirus in Belfast
Real news has value SUBSCRIBE