An Irishman’s Diary: Striking the right note on Turlough O’Carolan 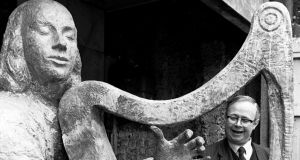 Thirty years ago this month, President Paddy Hillery unveiled a bronze monument to the harpist Turlough O’Carolan, in the market square, Mohill, Co Leitrim, the village where O’Carolan spent most of his life.

But harpists, then as now, were peripatetic, although not all of them were, according to one account of O’Carolan, people who “drank a great deal and had a temper”. And Mohill was probably primarily a base for this itinerant musician rather than a place of permanent residence: festivals, competitions and other events associated with the great composer have been held at many venues associated with him, including Nobber, Co Meath, his birthplace, as well as in Keadue, Co Roscommon, at around this time of year.

Folklore has it that his funeral in Kilronan, near Ballyfarnon in Co Roscommon, in 1738 lasted four days and was attended by no fewer than 60 members of the clergy. What is more certain is that – like all true Irish heroes – his memory as been associated with controversy as well as with celebration.

Wolfe Tone, apparently hungover, noted in his diary that he woke up during the Belfast Harp Festival in 1792 and heard “the Harpers again, strum, strum, and be hanged”.

More recently, in 1984, John Bruton, then a Fine Gael TD for Meath and minister for industry, trade, commerce and tourism, got into trouble for incautiously suggesting that O’Carolan’s relationships with his wealthy patrons were more than simply reflective of employment.

The following year, Grainne Yeats – a harpist of note – castigated the Central Bank, which had celebrated O’Carolan by featuring on its new £50 note a portrait of him, but one which had been reversed for design reasons so that his harp was attached to the wrong shoulder.

According to Ireland’s Eye, “several ridiculous incidents occurred during the concert, particularly a pugilistic trial of skill between an inspecting Major, and one of the mob, by trade an Attorney.”

A second commemoration took place in the Rotunda a week later, and “the room was splendidly illuminated, and a crown of coloured lamps, with the motto “God Save the King” in letters of gold, in front of the organ, might have dispelled any gloomy doubts about the loyalty of the Irish Harp Society, had not the secretary, most injudiciously, displayed a new green coat.”

The chronicler of these events was more than a little offended by some of the ladies present who “from whatever motive, of vanity or wantonness, seemed by the bold exhibition of their natural charms, bright competitors for popular admiration,” and by others “who exhibited their broad naked shoulders, and prominent bosoms, without a blush.”

In all of this, and no doubt because the event was also marked by the “drums, clarionets and cornets” of another musician named Tommy Cooke, “the melody of the Irish harp, as called forth by the sharp nails of the venerable Paddy Quinn, was in a great degree lost to the audience.”

Worse, it appears, was the behaviour of the audience, who “when God Save the King was sung . . . with a few exceptions, stood up, a practice as unnecessary as ridiculous, and which was first enforced, at the public theatre, by the insolence of a few coxcombical officers of the army, whose zeal carried them beyond the bounds of good breeding.”

The renowned Paddy Quinn, it appears, may not have been the first person who brought his harp to a party, but failed to receive adequate recognition.

1 Housing crisis: Seven solutions to Ireland’s biggest problem
2 Miriam Lord: Does anyone care if Leo smoked or snorted?
3 Fresh delays and millions in extra costs for children’s hospital revealed
4 Hilary Fannin: What I wish my spouse and I had done the morning of our wedding
5 Asylum claims by Georgians and Albanians brought to abrupt halt
Real news has value SUBSCRIBE