An Irishman’s Diary: Parallels between Seán Keating’s wild west and the real thing 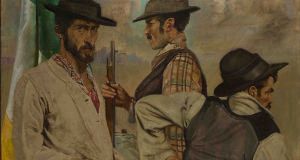 Seán Keating’s “Men of the West” Courtesy of the Hugh Lane Gallery.

One of the definitive paintings of Ireland’s revolutionary period is Seán Keating’s Men of the West. It represents 1917 in the Fintan O’Toole series Modern Ireland in 100 Artworks. And as the title suggests, it’s set in Connemara, although there is also something about the portrait of three men in Aran hats that suggests another west: the wild American one.

In its own notes on the painting, the Hugh Lane Gallery mentions the figures’ resemblance to “cowboys”. But they have had a more specific inspiration, from the US south rather than west, because the picture also bears striking similarities with a famous photograph of the American Civil War: Matthew Brady’s Confederate soldiers captured at Gettysburg.

In that, as in the painting, the heads of three be-hatted men form a triangle.  The bearded figure on the left of both is looking to the picture’s right. In both the man in the middle looks the opposite way. The big difference is the figure on the right, who in the photograph is the only one facing the camera, but in the painting has his back turned.

Keating may have had reasons other than the aesthetic for this. As was his habit, he put himself in the picture, as the fully-identifiable man on the left. Both the other two, however, were versions of his brother Joe, then an active IRB man, who may not have wanted anything more than his side profile on display anywhere.

The other key difference between the pictures is that Keating’s rebels have guns, or one gun at least, depicted centrally on the same axis as the flagpole flying the tricolour. The rebels at Gettysburg, by contrast, are disarmed.

But it’s interesting, even so, that their profiles remain heroic. And it would be an irony if the photograph really was Keating’s model. Brady’s pioneering camerawork showed the civil war in all its grim reality.

Yet his demoralised confederates would not have needed much brushing up to become the romanticised insurgents of the painting: begun in 1915 but completed, post-Rising, when its subjects represented a risen people.

So whoever you were, reader, my apologies for not crediting you by name. It may be consoling to learn, however, that your biographical eclipse is to some extent mirrored by Brady’s. Only last year he was the subject of a whodunnit story in the New York Times, after a heritage sign on his supposed birthplace in the Adirondack Mountains went missing.

Then there was the question of why anyone would want to uproot a notice saying that the great photographer, whose portraits may have helped put Abraham Lincoln in the White House (and certainly put him on the $5 bill, where one of the portraits remains) was born in 1822 “near this site”.

But even if the thieves were as likely to be scrap dealers as history students, they may have unwittingly corrected the record about the subject’s supposed NY origins. This is because there are strong grounds for believing Brady to have been of Irish birth – namely that he said so himself.  In pre-war census records, and in 1863 draft forms, he is listed as born in Ireland. It was only after he became famous that he declared himself fully American, something US biographers have repeated ever since.

Hence, in a follow-up to the sign story, the New York Times revisited the question of Brady’s birthplace, deciding it had probably been this side of the Atlantic, before emigration in childhood. And seeking to explain his own revisionism, they point to anti-Irish prejudices of the time but also to problems with money.

Despite his fame, Brady was bankrupt after the war. His hopes that the US government would buy the archive were dashed, and a war-weary public turned its back too. He died penniless in 1896, in the charity ward of a New York hospital. Veteran soldiers had to pay for his funeral.