An Irishman’s Diary on Verdun, one of the bloodiest battles in human history 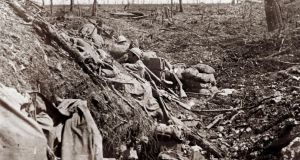 An undated archive picture shows a French soldier standing in the “Ravin de la Mort” (Ravine of the Dead) near the Fort de Vaux, near Verdun. Photograph: Collection Odette Carrez/Reuters

One hundred years ago today, a French fortress called Douaumont fell to the Germans, after four days of fighting. It was a target of such strategic importance that, for 18 months afterwards, the area surrounding it would witness one of the bloodiest battles in human history, with a death toll of 800,000.

The battle is named for the city Douaumont defended, Verdun.

And as Norman Davies writes in his great book, Europe: a History, “it is for the French memory what the Somme and Ypres were for the British and Caporetto for the Italians, or what Stalingrad would be for the Russians”.

The fate of one small village, with a prewar population of about 400, epitomises the struggle’s ferocity. The poignantly named Fleury-devant-Douaumont changed hands 16 times before the issue was finally resolved. By then, nobody lived there any more.

Part of Verdun’s horror is that it may from the start have been deliberately conceived as the war of attrition it became. The German general who planned it spoke of attacking a point of such national prestige that France would be forced to throw every available man into its defence. In the process, he reasoned, the enemy could be bled to death.

That was before a certain Marshal Pétain took up the grim challenge, urging “Courage”, and promising his country: “On les aura” (“We will have them”). Pétain is also often credited with another, even more resounding, phrase from the battle: “Ils ne passeront pas” (“They shall not pass”), although, apparently, that was somebody else.

In any case, he earned national hero status for leading the defence. And being almost 60 at the time, he can hardly have imagined then that he would yet live to see another world war in which his name would become a byword for treachery.

Verdun has a very long history of being a frontier post. More than a millennium earlier, in 843, it gave its name to a treaty that both solved a family dispute among the grandsons of the Emperor Charlemagne and also helped create the future France and Germany.

Before the first World War, the area had been best known as the scene of a doomed escape attempt in 1791 by King Louis XVI and Marie Antoinette. The pair had been fleeing for the nearest friendly border – the then Austrian Netherlands, now Belgium.   Alas for them, the king was spotted in a tavern at Varennes and they were arrested.

Only months afterwards, the first Battle of Verdun (1792) pitched the revolutionary French forces against the Prussians. The Prussians won then. And 122 years later, almost as soon as the Great War broke out, defence of the area was again costing French lives.

Among the generation of young writers who died in the 1914-18 conflict was Henri-Alban Fournier better known by his pseudonym Alain-Fournier. A year before the war, he had published his one and only completed novel, Le Grand Meaulnes (a title difficult to translate and so given several variations including “The End of Youth”).

It’s considered a classic in France, of the rite-of-passage genre. But after the war, it also came to be read as a farewell to a lost French idyll. By then, its author – appointed a lieutenant on the war’s outbreak – was lost too. In fact, he didn’t survive the first summer, dying in September 1914 after accidentally straying into German-held territory in the woods near Verdun.

He was buried there too, with the rest of his dead comrades. By 1918, however, nobody knew where the graves of 1914 were any more, so many others having succeeded them in that tortured landscape. So Alain-Fournier’s remains were lost as well until 1991 when, after a 14-year search, a local man found them, complete with part of a uniform bearing a lieutenant’s stripes.

Many of the later dead from Verdun will never be identified now. The months and months of relentless shelling turned the area, as Davies puts it, “into a cold stew of mud, masonry, and human remains”. Among the monuments there today is an enormous ossuary containing the bones, from both sides in the conflict, of 130,000 unknown soldiers.

1 Coronavirus: Ireland should ‘look seriously’ at closing borders to keep new infections out
2 A letter to Ireland from Italy: this is what we know about your future
3 'The last time I saw her was when she was being put into the ambulance'
4 10 hilarious Irish comedy videos to watch on YouTube
5 Sam McConkey: Tough next steps against coronavirus will require political consensus
Real news has value SUBSCRIBE