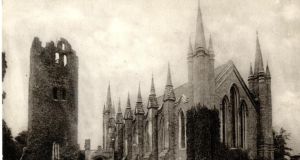 It seems scarcely credible these days, but once Tallaght was a small and somnolent village with a strong rural flavour set in a mainly farming hinterland.

All has changed, and changed utterly, since a British town planning expert, Myles Wright, began work in 1964 on his plans for the development of the greater Dublin area. Three years later, his report was published, in which he recommended the expansion of Tallaght, as well as Blanchardstown, Clondalkin and Lucan. He envisaged a population for Tallaght of 136,000.

In 1972, his report was adopted for the Co Dublin development plan and work began on creating the new suburb.

Until then, Tallaght had been a village with little more than the Main Street, a staging place on the way to Blessington. In the late 18th and early 19th centuries, a number of mills had been built along the nearby banks of the river Dodder, for making flour and paper.

Another smaller townland was that of Old Bawn, about half the size of Tallaght and even more rural.

Around 1850, the whole area had nine forges and seven pubs, one of them in Tallaght village. Old Bawn, like Tallaght itself, developed into a small village; in the mid-19th century, Old Bawn village had about 400 inhabitants.

The arrival of the tram encouraged people in the area to do their shopping either in Terenure or Dublin city centre, so the shopkeeper class never developed in the old Tallaght village. The tram managed to keep going as far as Blessington until 1932. The Poulaphouca section had closed in 1927. After the tram closure, most people depended on ponies and traps, bicycles, walking and the occasional bus to get around; cars were rare.

All the mills along the Dodder had closed down by the mid-19th century. At about the same time that the mills vanished, Irish died out as an everyday language in the district.

It took until 1924 for the Tallaght area to get its first major factory, Urney’s the chocolate makers. But during the 1920s, the 1930s and the 1940s, if any work was available in the Tallaght area, it was mostly on farms.

While shopping in the old Tallaght village was limited, so too were the possibilities for entertainment.

Beyond Doyle’s Hall, which eventually became a snooker hall, Molloy’s pub and house dances, people had little opportunity for entertainment. It wasn’t until the 1960s that the Embankment pub became popular for ballads.

Apart from the farm workers and their families in Tallaght, the area also had strong artistic connections. Katharine Tynan, the novelist and poet, lived in Tallaght, and WB Yeats often stayed with her.

Tallaght was also known for Malachi Horan, who died in 1945, aged 98. He lived all his life on Killinarden Hill, in an entirely rural district, and when a local GP made notes of all his stories. The resulting book, at the end of his life, became a unique record of Tallaght’s old way of life, three decades before it started to disappear for ever.

Some historical places still survive in Tallaght, such as St Mary’ s Priory, and vestiges of the old village can be seen along the Main Street. But these days, the modern Tallaght, a city in everything but name, bears no resemblance at all to the village that was buried beneath all the developments of the past 40 years.

1 Housing crisis: Seven solutions to Ireland’s biggest problem
2 Owen Doyle: Creeping professionalism of schools rugby a threat to the game
3 Asylum claims by Georgians and Albanians brought to abrupt halt
4 Snow on the way as Ireland’s weather set to turn colder
5 Cosgrave should give his speech to Web Summit’s partners in Saudi Arabia
Real news has value SUBSCRIBE