An Irishman’s Diary on John Mitchel, a contentious patriot

Bicentenary of birth of an unrepentant rebel 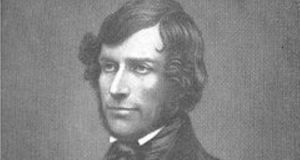 The contentious patriot John Mitchel was born 200 years ago today. Having preached social revolution in Ireland during the Famine, his subsequent support for the institution of slavery in America was unambiguous. None the less, FSL Lyons considered he was “among the two or three most forceful and effective journalists to write for Irish newspapers during the 19th century”. His uncompromising rhetoric was, moreover, an influential strand of Irish nationalism. A youthful John Dillon “found two congenial spirits, Mitchel and Davis, enough to turn a race of slaves into the wildest lovers of their country”.

He can be described as a precursor of Fenianism. Although largely indifferent to religion, he detested the emotional excesses of evangelical revivalism and displayed a sympathy for Catholicism, which he regarded as a vital element of Irish nationality.

Mitchel was born on November 3rd, 1815, near Dungiven, Co Derry. His father, a Unitarian minister, had been a United Irishman. The family moved to Dromalane, outside Newry, Co Down, where he attended a classical school. He graduated from Trinity College Dublin in 1836, and later that year eloped with 16-year-old Jenny Verner. Overcoming obstacles, they were married in Drumcree parish church, Co Armagh. Throughout the vicissitudes of his career he was sustained by the love and loyalty of Jenny, a woman of intelligence and indomitable courage.

Already known for his nationalist sympathies, in 1841 he met Charles Gavan Duffy, who introduced him to the other Nation co-founders, Thomas Davis and John Blake Dillon. Mitchel grew close to both men and contributed his first article in 1843. He also wrote a Life of Aodh O’Neill for the journal’s “Library of Ireland” series.

He forsook the law for journalism when Davis died prematurely in September 1845. Mitchel, who succeeded Davis as the dominant personality among the Young Irelanders, quickly surpassed him in the vigour of his style, and for two years wrote nearly all the political articles in the most famous newspaper in Irish history.

He moved dramatically to the left during the terrible Famine years (to the embarrassment of the moderate Young Ireland majority).

He embraced the doctrine outlined by James Fintan Lalor – of harnessing the struggle for political independence to the engine of agrarian revolution – “as completely as a man adopts a new religion”. After Duffy censored some of his Nation articles, Mitchel resigned and founded the United Irishman “specifically as an organ of revolution”.

Having despaired of the landlords and with contempt for the middle classes, he now relied – like Theobald Wolfe Tone – on the men of no property. He attempted to persuade “the Protestant democracy of the North” that government and aristocracy were exploiting sectarian tensions to blind them to their true interests.

He believed “society itself stood dissolved” by the Famine. The theme of social dissolution occupies an important place in Mitchel’s thinking, bridging his conservatism and revolutionary idealism. It help to explains, but does not justify, why he championed the oppressed at home and became an apologist for slavery in America.

Crossing “the path of the British car of conquest” involved, however, being torn from his wife and children, convict ships, banishment to Van Diemen’s Land, escape and a restless life as journalist, backwoods farmer and advocate of the slave-owning South during the American Civil War (in which two of his sons were killed).

He fell into ill health and poverty, which was alleviated in 1873 by a £2,000 testimonial raised by John and William Dillon, sons of his old friend. This enabled him to visit Ireland and, on returning to New York, learned of a forthcoming byelection in Tipperary. Despite worsening health he came back to fight the contest, arriving at Cobh to learn he had been elected the previous day. Disqualified as an undischarged felon, the unrepentant rebel was re-elected but died (aged 60) nine days later in his old home outside Newry.

During the Famine Mitchel witnessed scenes which “might have driven a wise man mad”. His Anglophobia was rooted in that great calamity. Henceforth his mind was constricted by a hatred of the British imperial system. His formulation that the Almighty sent the potato blight but the English created the Famine was burned into the folk memory of the diaspora. His classic prison memoir, the Jail Journal, became the bible of militant republicanism. Arthur Griffith’s edition was reprinted four times in 1913-21. For Pearse it was “the last of the four gospels of the new testament of Irish nationality . . .”