An Irishman’s Diary on Edwin Lawrence Godkin, the Irish-born newspaper editor who took on Tammany Hall 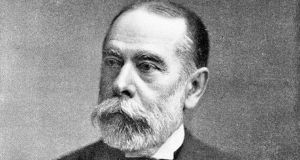 ‘Publicist, Economist, Moralist”, reads the inscription on the gravestone of the Irish-born journalist and editor Edwin Lawrence Godkin. Today, he is usually remembered as the founding editor of the American weekly liberal magazine the Nation and as editor of the New York Evening Post.

Godkin was a reformer who espoused progressive causes, such as US civil service reform and currency reform. He wanted journalism to elevate and not trivialise with gossip and “coffee house babble”. Born in the picturesque Georgian hamlet of Moyne, Co Wicklow, in October 1831, Godkin was educated at private schools in Yorkshire and Belfast. He later accepted a scholarship to what was then Queen’s College, Belfast, from where he graduated in 1851. He then went to Lincoln’s Inn in London to study law, but was lured away from the legal profession by the world of journalism.

In 1856, at the age of 25 , Godkin moved to America. There, he wrote a series of articles for the London Daily News on life in the south, travelling for many months in the southern states on horseback, seeing slavery at first hand. He studied law and was admitted to the bar in New York in 1858, but again chose journalism over law and wrote editorials for the New York Times.

Godkin founded the Nation in July 1865 in the aftermath of the American civil war. It was to be an independent, radical, inspiring, elevating publication, which took on vested interests. It combined news and current affairs, leading editorials, correspondence from abroad, together with poetry, book reviews and a small amount of scientific and financial news.

Contributors to the new magazine included a good mixture of experience and youth, in the form of Charles Eliot Norton, an established author and critic and editor of the North American Review, and a young Henry James, who wrote a book review for the very first edition of the magazine and who would go on to contribute many essays, commentaries and theatre reviews over subsequent years.

Godkin campaigned against the excess of the “gilded age”, carpetbaggers, US territorial expansion, and municipal and state corruption in the form of Boss Tweed and Tammany Hall. He supported the freedmen, free trade, civil service reform, and currency reform. Because of the principled stance he took on many of the issues of the day, Godkin was sometimes a target for political cartoonists. In one cartoon, Puck caricatured him as an old woman who was holding America back from her expansionist adventures abroad.

When the Nation was sold to the New York Evening Post, Godkin became editor of the Post, a position he held until retirement in 1899.

After his death in May 1902, a group of Godkin’s admirers created a fund to establish a series of lectures to be held at Harvard University in his honour. Known as the “Godkin Lecture”, sponsors included the financier John Pierpont Morgan and the industrialist Andrew Carnegie. The lectures are based on “the essentials of free government and the duties of citizens”. In 1967, the then British Conservative party leader, Edward Heath, spoke about the future direction of Europe. In recent years, the Burmese democracy activist, Aung San Suu Kyi, has delivered the lecture.

Godkin kept an interest in Irish affairs. He was delighted to be present when the Home Rule Bill was passed in the Commons, but was saddened when it was rejected by the Lords, saying “Home rule had a fleeting, consumptive beauty”.

To the poet Matthew Arnold, Godkin was “a typical specimen of the Irishman of culture”.

1 Admission of mistake in Oxford vaccine dose raises doubts over reliability
2 Michael J Fox: ‘In the wheelchair, I’m luggage. No one listens to luggage’
3 Saoirse Ronan and Daniel Day-Lewis on ‘greatest 21st-century actors’ list
4 Helen McEntee holds up well for someone with barely a leg to stand on
5 The Crown’s Josh O’Connor: ‘I’m a republican. I’m not interested in the royal family’
Real news has value SUBSCRIBE