An Irishman’s Diary on censorship and the Oireachtas

Views on censorship are politically and culturally conditioned 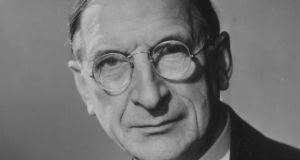 The use of parliamentary privilege in an attempt to circumvent media censorship in Ireland has a longer history than is generally supposed. Although the current controversy involving the TD Catherine Murphy and Denis O’Brien relates specifically to judicial censorship, there have been a number of other significant instances where parliamentarians — usually unsuccessfully — have attempted to frustrate legal, cultural or political censorship.

One of the earliest was a debate in Seanad Éireann in 1942 on the banning, by the Censorship Board, of the book The Tailor and Anstey, by Newry-born Eric Cross, for its frank account of the marital doings of a west Cork tailor named Buckley and his wife Anastasia. Senator John Keane read portions of the book aloud during the debate: these were then struck from the record so that they could not be legally published.

More relevant, politically speaking, was the controversy surrounding the Dáil speeches by James Dillon TD, then deputy leader of Fine Gael, on the subject of Irish neutrality. Dillon, who resigned from Fine Gael on the neutrality issue, reprinted his Dáil material as part of his campaign for re-election in the 1943 general election, whereupon it was promptly banned by the wartime censorship regime under Frank Aiken.

This decision was later rescinded by de Valera for political reasons, and Dillon was allowed to reprint his speeches privately for distribution during the election campaign. It can hardly have modified his opinion of the war-time taoiseach, whose ancestors, he once colourfully (and probably inaccurately) said, were “were banging banjos and bartering budgies in the backstreets of Barcelona” while his — Dillon’s — “fought for Ireland down the centuries on the continent of Europe.”

A few years earlier, the 1936 debate on the draft Constitution had demonstrated how strongly views on censorship are politically and culturally conditioned. The Opposition was convinced that de Valera, who had launched the Irish Press in 1929, was determined to add media control to his political powers, and the exchanges were so hot-tempered that the Dáil at one stage had to be adjourned.

De Valera’s tactic on this occasion was to present himself as the moderate between two extremes. After an amendment had been accepted which extended the freedom of the press to include “criticism of government policy”, de Valera nailed his personal colours to the mast when he expressed is opinion that the propagation of what he described as “anarchical principles” should not be allowed, and that “you should not give the proponents of what is wrong and unnatural the same liberty as would be accorded to the proponents of what is right.”

And even his fiercest critic on this score, Fine Gael’s John A Costello, found himself in a measure of agreement with tis point of view, when he told the Dáil that he believed that “the propagation of Communistic doctrine would be against public order and morality.”

Closer to our own time, and more relevantly to the current controversy, a number of Scandinavian governments have adopted — and subsequently modified — policies which explore the limits of personal privacy in financial matters. Although Norwegian tax records for individuals have been publicly available since the 1800s, a Norwegian recently won a court case in which he alleged that the publication of his tax records in 2010 and which included inaccurate information was in conflict with his human rights. Norwegian newspapers are now not allowed to reproduce such information on their websites.

In Sweden, where a similar system obtained, it is now possible to obtain information about an individual’s tax affairs only if an applicant has a “legitimate need” for it.

Perhaps the last word can be left to de Valera. In that 1936 debate on the draft Constitution he was faced with criticism from the leader of the Labour Party, William Norton, who described the Constitution’s provision on freedom of speech as having “a real Nazi ring about it.”

De Valera, no doubt conscious of the fact that the Labour Party was the only national party without any significant support in the print media of the day, made a defence of his constitution in terms which he undoubtedly felt would appeal to Norton’s class instincts. The purpose of the article under criticism, he said, was to provide safeguards against the emergence of “wealthy people making still more wealth through the Press and making that wealth in a manner dangerous to the public.”