An Irishman’s Diary about James W Upton, the forgotten journalist of 1916

A lifetime’s commitment to freedom of speech 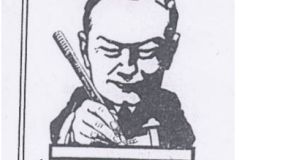 “Upton offered a platform in ‘Honesty’ to political views from across the spectrum, a policy that would eventually bring him into conflict with the leadership of Fianna Fáil.”

James W Upton was a celebrated socialist republican and Gaelic Games journalist who took part in the Easter Rising; however, until recently his name and reputation were largely lost to history. Upton’s journalism was so well regarded in its day that in 1936 he was described by J Bouch of the National Library as being “next to Griffith the most trenchant of republican journalists”.

Upton began his career as a reporter on the Waterford Star in 1904, following a number of years of providing Gaelic reports to various regional newspapers under the pen name of “Valiant”.

A friend of Arthur Griffith, he was an active Sinn Féiner, travelling widely to promote the cause and writing for its newspaper. In 1914, as a result of his nationalist activity, Upton was forced to resign from the Waterford Star and subsequently took up employment as editor of the Kilkenny Journal.

Upton also wrote and edited for Joseph Stanley’s Gaelic Press, providing copy for the Gaelic Athlete and editing, among others, Honesty and the Spark, under the pseudonyms Gilbert Galbraith and Ed Dalton. Following a raid on the Gaelic Press by British authorities in March 1916, Stanley and Upton continued publication of the Spark in the basement of Liberty Hall, under a guard provided by the Irish Citizen Army.

On Monday, April 24th, following a meeting with Pearse and Connolly in the GPO, Stanley commandeered a small printing works in Halston Street in order to print and distribute Pearse’s bulletins. Upton remained with Stanley throughout the Easter Rising, jointly authoring several articles in Irish War News and assisting with printing and distribution of subsequent bulletins. In the aftermath of the Rising, Upton slipped back to Kilkenny to continue his editorial role and republican agitation; activities that earned him a Black and Tan “death warrant” in 1921.

Despite Stanley and others who were active in Halston Street being honoured, Upton’s role was never acknowledged, doubtless in part due to his own reticence in seeking any credit. Despite the protestations of his wife, son and friends in subsequent decades, Upton refused to claim a pension or medal, asserting that he did what he did for Ireland and not to seek any reward for a job “only half done”.

Upton resigned as the editor of the Kilkenny Journal in 1922 and spent a number of years working as a freelancer for Irish and international newspapers, including coverage of the Paris Olympics of 1924. He relaunched his pre-1916 publication Honesty in February 1925. Honesty’s second edition was to be every bit as republican as its first. However, it carried far more socially concerned content, exploring issues relating to slum housing, prostitution, addiction and political corruption.

Upton, who had a lifetime commitment to freedom of speech, offered a platform in Honesty to political views from across the spectrum, a policy that would eventually bring him into conflict with the leadership of Fianna Fáil. In July1929, Upton published an article by Patrick Belton that attacked the leadership of the party, accusing them, among other things, of lying in the Dáil. Boland and Lemass cited Belton’s article as justification for surreptitiously instructing the party membership to boycott Honesty, an action that effectively sounded its death knell. However, the attack on Honesty was as much about de Valera’s interest in the flagging Nation and the soon to be launched Irish Press, as it was about their ire at Upton’s editorial policy. Honesty struggled on for another couple of years but eventually closed in February1931. In May of the same year Upton launched a new publication, Publicity; however, it failed after just eight months, ultimately ending Upton’s career as an editor.

Upton was to enjoy one more moment of controversy in 1932 when he was selected by the GAA to write a history to commemorate its silver jubilee of 1934. He used this opportunity to attack the 19th-century ultramontane Cardinals Cullen and McCabe for their pro-British sympathies, a step too far for the GAA Central Council, which demanded that Upton redact his comments. When he refused to do so, the project was shelved.

For the next 10 years Upton barely scraped a living as a freelance journalist, and in 1945 he was forced to take up employment with Waterford City Library as a reference librarian. While he continued to provide occasional copy for the Waterford Star and the Waterford Standard, his long and distinguished career as a journalist was effectively over. James W Upton died in Waterford in 1956, aged 84.

His headstone is carved with the strapline from Honesty, “Be just and fear not”.