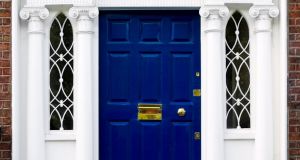 The Georgian doors of Dublin are now famous for, among other things, their proliferation of vibrant colours. But they used to be much more subdued and uniform, in keeping with the perfect symmetry of the houses. And there are some entertaining myths about how the painting anarchy began.

A favourite yarn of tour guides centres on the rivalry between two former neighbours on Ely Place: the writers George Moore and Oliver St John Gogarty. According to this, one or both was in the habit, when drunk at night, of mistaking the other’s house for his own. So Moore painted his door green, while Gogarty painted his red. Then the fashion escalated.

I’m fairly sure the story is made up. Apart from anything else, Moore was not much of a drinker. And further to spoil the plot, I believe that although the two men lived in numbers four and five, respectively, they were on opposite sides of the street. You would have to be very inebriated to get your address that far wrong.

But while browsing the writings of WB Yeats recently, I discovered a more plausible account of the colour-proliferation’s possible origins, also involving Moore. In this version, when the latter first arrived in Ely Place, he found all the doors painted white, “by an agreement between the landlord and tenants”.

Moore, however - who had studied art in Paris as a young man - insisted (in Yeats’s words) “that the whole decoration of his house required a green door”. Yeats guessed his real motivation had more to with patriotism than aesthetics. In any case, by re-painting it, he earned the enmity of three sisters who lived next-door, remembered by Yeats as the “Miss Beams”.

Whatever about the incident’s effect on Georgian door colours in general, it led to an epic feud between Moore and the Beams. Soon afterwards, the sisters bought a copy of his novel Esther Waters, shredded it, and posted the remains through his letterbox, with a note saying it was “too filthy to keep in the house”.

Moore in turn retaliated with a terror campaign involving the Beams’ dog. Yeats learned of this while staying in his fellow writer’s house once and, as instructed, putting the chain on the door when he came in after midnight.

When he then had to let Moore back in to his own home, the latter explained: “Oh, I forgot. Every night I go out at eleven, at twelve, at one, and rattle my stick on the railing to make the Miss Beams’ dog bark.”

In a further escalation, which reached the newspapers, the Beams then hired “organ-grinders” to play outside Moore’s window when he was writing. He prosecuted the organ-grinders.

Over time, his enmity extended to the sisters’ cat. This is because he had a garden across the street, wherein there was a blackbird whose singing he loved. Yeats recalled him proudly telling visitors about the bird and asking: “If I were the bad man people say I am, could I enjoy its song?”

But every time he saw the cat cross the street, he feared for the blackbird. So when he was at home, he threw stones at the predator. And when he was away, he set a trap for it. The Beams complained to the Society for the Prevention of Cruelty to Animals, apparently leading to a three-way correspondence on the rights, in Moore’s words, of “cat versus bird”.

Alas, as Yeats remembered it, the plot took a tragic twist. Passing through Dublin some time later, he found the novelist in “great depression”. Moore asked if he remembered the cat and the trap. Yeats: “Yes.” Moore: “I have caught the bird.”

Moore’s particular eccentricities – which were clearly considerable – aside, I imagine this is closer to explaining how the modern kaleidoscope of Dublin’s Georgian doors came about.

The colours were understated and mutually sympathetic to begin with, so as not to distract from the architecture’s elegant lines. But gradually, such uniformity must have become oppressive. The colourful lives that lurked behind the doors demanded some sort of outlet, and there was only so much you could do with individualised door-knockers or fanlight grills. The doors were where owners could really express themselves.

In time, the cacophony of colours became itself a classic image of Dublin. It was first promoted in a 1970s Bord Fáilte campaign, then in a famous poster collage. And the poster remains hugely popular, although as we have seen, it’s one picture in the making of which it cannot be said, with total confidence, that no animals were harmed.

1 Dublin gangland figures involved in Drogheda feud that killed 17-year-old
2 Murdered and mutilated: Keane Mulready-Woods and the teenagers of gangland
3 Mary Lou has to call for the smelling salts as SF councillor deals a knock-out blow
4 Who was murdered teenager Keane Mulready-Woods?
5 Patrick Freyne: The mystery of Dermot Bannon and his many surrogate wives
Real news has value SUBSCRIBE