Displaced people will not return home for years. We must help them rebuild lives 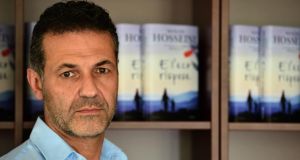 Like millions around the world, I have been moved by the recent public outcry and spontaneous acts of solidarity towards refugees in Europe.

As an ambassador for UNHCR, the UN refugee agency, I have been overwhelmed by the support for the organisation’s efforts in Europe, where UNHCR has delivered tents, blankets, food and other essential items refugee families so desperately need in this period of emergency.

But what next? What happens when the dramatic images fade from our screens?

They must not fade from our collective consciousness. This is when the hard work truly begins.

It is vital to remember the average length of time a refugee lives in exile is more than 15 years, be it in a camp in Jordan or Uganda, an informal settlement in Lebanon or Thailand, or resettled in the United States or Europe.

The difficult work ahead lies in making sure the refugees remain contributing, productive members of society.

We must ensure refugees have access to education and vocational skills training, because this is in the best interests of everyone – the host country, the refugees and the home to which they hope to return.

Far too often, refugees are viewed as burdens. In reality, they often become some of the most dynamic members of society.

It is well known that Einstein was a refugee, as were Marlene Dietrich, Madeleine Albright, George Soros, Sigmund Freud and Isabelle Allende, to name just a few.

But there are millions of others, less celebrated but no less heroic, working quietly, anonymously, often under difficult and dangerous circumstances.

Aqeela Asifi, whom UNHCR has announced as this year’s Nansen Refugee Award laureate in recognition of her extraordinary commitment and exceptional service to refugees, is one such person.

In 1992, at the age of 26, Asifi fled the Mujahedeen siege of Kabul, Afghanistan, with her husband and two small children, and arrived in the remote Kot Chandana refugee village in Pakistan.

She thought it would be a matter of months before she was home once more.

But she soon realised what all refugees know: in the midst of the noise and chaos and trauma, your focus is on the immediate. You want to protect your children and seek sanctuary.

It takes time to process that going home soon is an improbable dream; that your life has been reset at zero; that you have to build it back up.

When this acceptance does set in, a shift happens, from survival to resilience.

As a former teacher, she was struck by the lack of schools in Kot Chandana and a total absence of learning opportunities for girls.

Having won the backing of the village elders, Asifi went door to door convincing reluctant parents to let her tutor their girls.

Asifi’s tiny school blossomed and she received funding from the Pakistani government.

Asifi expanded to six tents and began including local Pakistani girls as well. Today, the school is a permanent building.

Asifi has transformed the lives of more than 1,000 girls, and her efforts have encouraged the opening of a further six schools .

At UNHCR it is known that educated Afghans are three times more likely to repatriate than stay in their country of refuge.

Education has been a mobilising factor for people returning to Afghanistan. Education helps protect refugee children from illiteracy, abuse and exploitation via child labour, early marriage or recruitment to armed groups.

Education offers refugees a pathway out of poverty, and gives them the skills to build a prosperous future when they return home.

Globally more than 50 per cent of refugees are children. Yet only one in every two refugee children attends primary school.

I hope that when the media spotlight moves away from the crisis the awareness and goodwill towards refugees remains strong and that we remember refugees need more than just emergency support.

They need the hope of a future.

Khaled Hosseini is a goodwill ambassador for UNHCR. An Aghan-born author, he has won acclaim for best-selling novels The Kite Runner, And The Mountains Echoed and A Thousand Splendid Suns

1 We need to reverse our thinking on lockdown
2 Seán O’Brien: Anger over my parents’ break-up never left me
3 Why Waterford is ‘the best Covid county in Ireland’
4 Covid-19: Trump goes on defensive as Biden claims president has ‘quit on America’
5 Two hundred Irish retailers for all your online Christmas shopping
Real news has value SUBSCRIBE