Allyson Pollock: Time to tackle brain injury in rugby at all levels

Concussion is a routine occurrence in rugby, removing the tackle would change that 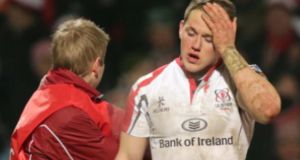 At the height of the World Cup, World Rugby’s chief medical officer Martin Raftery has said that the laws of the game, particularly the tackle, may have to change to reduce the risks of concussion.

Across Ireland and the UK, tens of thousands of players are injured annually and many thousands attend their local emergency department with serious injuries.

In some studies up to half of all emergency department attendances for sports injuries in children are due to rugby. Most rugby injuries occur in children and amateur club players.

Prompting the calls for a change in the law is the emerging medical evidence about concussion and America’s recent National Football League $1 billion settlement for concussion-related brain injuries to its 18,000 retired players.

Concussion, or traumatic brain injury, is a routine occurrence in rugby. On average there is at least one concussion per match and two thirds of concussions occur during the tackle.

It is also under reported. Players play on, sometimes with catastrophic consequences as happened to 17-year-old Rowan Stringer in Canada and 14-year-old Benjamin Robinson in Northern Ireland, both of whom died due to double impact syndrome, repeat concussion.

Researchers have also found a link between repeat concussions and chronic traumatic encephalopathy (CTE), a progressive degenerative brain disease found in people with a history of repetitive brain trauma. The degeneration can cause memory loss, confusion, impaired judgment, impulse control problems, aggression, depression, and, eventually, dementia. CTE has been an issue in boxing since the 1920s and in American football since the 1960s.

None of the four home nations – England, Scotland, Wales and Ireland – collect comprehensive data on rugby injuries. And while their rugby unions have rushed out concussion initiatives, under the banner of the Recognise and Remove programme, parents can take small comfort. None of these initiatives – with the exception of a New Zealand study – have been fully evaluated so we don’t know whether they reduce injuries.

If the rugby unions were really serious about caring for children, they would recognise that most injuries occur during the collision and they would remove the tackle and stop the focus on platitudes designed to appease anxious parents and players.

With the focus now on concussion, spare a thought for the children paralysed from spinal injuries and all those who can never return to the game because of dislocated shoulders, ligamentous tears and compound fractures.

Concussion is only one of a number of very serious injuries which result in time out from school and play and are also the main reason for children giving up the game.

Dr Fiona Godlee, editor-in-chief of the British Medical Journal, wrote earlier this year, “let’s call the current state of monitoring and prevention of rugby injury in schools what it is: a scandal. It needs urgent remedy before more children and their families suffer the consequences of collective neglect”.

A BMJ poll of doctors confirmed that 72 per cent felt the game should be made safer.

Parents expect the state to look after their children when they are at school. The Irish and UK governments can no longer abdicate their responsibilities to children, leaving them exposed to catastrophic risk and long-term harm.

The situation which allows the sport’s own governing bodies to decide what, if any, information to collect and to determine the laws of the game for children cannot continue. Now that the chief medical officer of World Rugby, and the rugby unions are calling for a rule change to tackle the issue, the time has come for the childrens’ commissioners and the chief medical officers in each of the four nations to act.

Allyson Pollock is professor of public health research and policy at Queen Mary University of London.