A walk in the park – Fionnuala Ward on urban wildlife 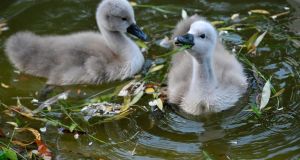 There’s a park in my neighbourhood. It’s not particularly big but it fits the bill, having trees and a playground, a bit of a hill and a river.

I go for a walk there most mornings. I want to do something – anything – before turning on the kettle and then the laptop, in that order, working from home having long since lost its sheen.

The park came into its own during the recent lockdown. When friends from other necks of the wood were describing in great detail the monotony involved in negotiating the same streets night after night, I tended to tread carefully.

After all, I had access to greenery and the Tolka and all the wildlife that went with it.

There’s the heron, for a start, perched on a rock or lurking around the edges of the water, fixed and staring and entirely focused.

If that bird had been put in charge of Brexit negotiations, the EU would have exited the whole business years ago now, with every i dotted and t crossed.

But the stars of the show are the cygnets. What is it with humans and cygnets? As a child in Navan, we kept watch on the river for signs of a new swan family.

Urban parks didn’t exist in those days so once word hit the street, we hauled ourselves up and over the side of the bridge and looked down, way, way down at the waters below to catch sight of the proud parents with their young ones in tow.

In Griffith Park, it’s all about the weir. And this weir is a minor man-made structure at the Drumcondra Road end of the park. Minor, of course, to big, strong grown-ups. Not so minor to baby swans, trying to figure out the world around them and eager to catch up with their parents pottering about serenely on the other side.

These cygnets fairly throw themselves against the weir in an effort to get up and over, expending untold amounts of energy.

It’s become a neighbourhood gathering point. We stand there, phones in hand, desperate to capture the moment when at least one successfully makes the ascent.

But I’ve never managed to do this. And believe me, I’ve done my fair share of standing and videoing.

But the ducks, well the ducks, they take on that weir with enviable aplomb, coming and going, over and back, as it if were a mere blip in the life of the river.

And as for their reaction to us on the bank and the travails of their bigger, more glamorous distant relatives struggling to make headway upstream? Suffice it to say, I’ve caught many a smug backward glance.

And of course, the ducks have babies too. There are ducklings on the river, nestled on rocks mid-stream and they’re small and cute and lovely but somehow lacking in the drawing power of their greyer, ganglier cousins.

And so back to them.

Occasionally some or even all of the cygnets, do manage to join their parents on the other side, as evidenced by the appearance on numerous occasions of the whole family group further down the river, in the very centre of the park.

But no witnesses to the successful assault on the weir have ever come forward. They do not exist.

No doubt it is done in the dead of night. There may be ropes and pulleys involved. Possibly a helicopter.

What I can attest to, however, is their management of weir number three, a veritable Everest of concrete and entirely insurmountable. It’s positioned shortly after a series of stone steps, cut into the bank and used as a launch pad for the neighbourhood dogs to fetch balls and sticks thrown into the water.

I was in early-morning walking mode, earphones in place, no doubt railing against the inequities in the world, when I found myself stopping dead to facilitate the movement of parents and cygnets, one after the other, all in a line, up the steps, across a section of park and back down the into the river on the far side of the weir.

And so they do.

What with the resourcefulness of the swans, the nonchalance of the ducks and the steeliness of the heron, us wingless creatures, quarantined or not, have to be the most boring life-forms in the park.

By a country mile.