A volcanic eruption with global repercussions – An Irishman’s Diary on 1816, the year without a summer 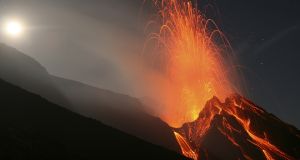 If you have been disappointed by the lack of a good summer in Ireland in this or recent years, things might have been much worse because, had you lived here 200 years ago, you would have experienced “the year without a summer”. In 1816, there was a sudden temperature drop, which caused disastrous repercussions in the Northern Hemisphere, in particular.

Our planet had already been going through what is now known as the Little Ice Age. This long period of global cooling, which had started in the 14th century, was severely exacerbated by the volcanic eruption of Mount Tambora on the island of Sumbawa, Indonesia (at that time part of the Dutch East Indies) between April 5th and 15th, 1815.

Robert Evans (“Blast from the Past”, Smithsonian Magazine, July 2002) described the eruption as “the most destructive explosion on Earth in the past 10,000 years”. He went on to say that it was 10 times more powerful than the eruption of Krakatoa, 900 miles away, but the latter is much better known because by the time it erupted in 1883, the telegraph had been invented and spread the news quickly.

The Mount Tambora eruption sent huge amounts of volcanic ash into the upper atmosphere, leading to a temperature drop because less sunlight could get through the stratosphere. Prof John D Post’s book, The Last Great Subsistence Crisis in the Western World (1977), looked at how northeastern America and parts of western Europe, in particular, were the worst affected by the consequences of the eruption.

In May 1816, snow and frost killed off crops in the upland areas of Massachusetts, New Hampshire and Vermont, with Atlantic Canada suffering similarly. Snow and especially frost continued into June, July and August, with lake and river ice observed as far south as Pennsylvania and Virginia. The destruction of crops led to food shortages and starvation for many, especially the poor.

Europe was just emerging from the Napoleonic Wars at the time, and the low temperatures and continuous rain of 1816 led to severe food shortages. There were food riots in Britain and France, with arson and looting in many European cities. Landlocked Switzerland was worst affected by the violence, and the famine caused the government to declare a national emergency.

“The ‘year without a summer’ in 1816 produced massive famines and helped stimulate the emergence of administrative states,” Al Gore wrote in his book Earth in the Balance: Ecology and the Human Spirit (1992).

There was continuous rain in Ireland for eight weeks during that non-summer; crop failure and famine followed. The famine led to a major typhus epidemic occurring between 1816 and 1819; it is estimated that up to 100,000 people died. With the failure of harvests in Britain, there was also extensive suffering and death.

On Sumbawa itself and on neighbouring Indonesian islands, the violent eruption of Mount Tambora caused catastrophic loss of life. In China and India, the consequent cold weather and floods killed animals and destroyed crops, leading to terrible famine and cholera epidemics.

It may seem almost irreverent to talk of cultural consequences of the eruption, given the tragic loss of human life and scale of suffering involved. But we might not have had Frankenstein’s monster or Dracula or Turner’s stunning sunsets or even the bicycle without it.

Percy Bysshe Shelley, Mary Wollstonecraft Godwin (who later married him), Lord Byron and John Polidori went on a holiday to Lake Geneva in the summer of 1816. They had to spend a lot of their time indoors because of the cold, wet weather and challenged each other to write the most frightening stories possible. Wollstonecraft Godwin came up with Frankenstein and Byron produced A Fragment, which Polidori developed a few years later into The Vampyre, often seen as a precursor of Dracula.

Particles of volcanic dust in the atmosphere can cause spectacular sunsets, and the celebrated artist JMW Turner captured these colourfully for posterity in paintings such as Chichester Canal (1828) and The Lake, Petworth (1829).

Failed harvests caused the price of oats to soar, which made it too expensive for many people to keep horses. The German inventor Karl Drais, looking for alternative methods of transport, invented a type of velocipede, an early form of what we know today as the bicycle.

The consequences of the eruption of Mount Tambora show how interdependent the earth, its atmosphere and its inhabitants are, a mantra we really need to keep repeating given the concerns over global warming and the erosion of the protective ozone layer.