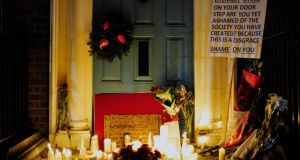 Candles pictured outside at the doorway in Molesworth street where Jonathon Corrie who was homeless was found dead. Photograph: Aidan Crawley/The Irish Times

All I saw at first was a group of men attempting to wrap and lift a large unwieldy object. It could have been a large dog, such was the awkwardness of its dead weight. It was partly covered in thick white plastic sheeting, which kept blowing open. Molesworth Street at about 10.30am was, otherwise, eerily empty and silent despite its proximity to the gates of Leinster House.

Then I noticed a discreet green van marked “ambulance” and thought, “Has someone collapsed”? But if a TD, say, had collapsed on the way to work, there would have been a fuss – an ambulance, journalists, gardaí keeping back onlookers, and a doctor, surely? And there seemed to be no urgency to this silent scene, as the men struggled with their cumbersome burden. Was it the aftermath of a murder? It couldn’t be – there was no one protecting the scene, no forensic crew in white jumpsuits or tent erected for privacy. No cameras.

In the split second it took to formulate the truth, I knew from the utter lack of ceremony, starkness of the scene, and the complete lack of anyone but the body and the men sent to collect it, that this could only be the corpse of a homeless person.

Then I saw the tweet. This was Jonathan Corrie, the 43-year-old man found dead in a doorway at 8am on Monday, December 1st. I was seeing him, two and a half hours later, without a mourner in site. This was a man who, for all his difficulties, had once been an infant in his mother’s arms.

In the year he was born – 1971, we now know – there were homeless being accommodated in Griffith Barracks – 51 people in all, including 18 mothers and 30 children. The fathers were accommodated separately, breaking up families. Recorded in the Dáil record, Dr Noël Browne asked: “Is it not about time that this basic and fundamental provision of the Constitution that the family is the basic unit of our society should be honoured in respect of these unfortunate people who for the past 10 years have been in one way or another living in scandalous conditions?”

There are “scandalous conditions” every year. Forty-three years later, there are an estimated 160 people sleeping rough on the streets of the capital and 800 homeless families – who are, perhaps, even easier to ignore because we don’t see them.

To focus solely on the 160 people sleeping rough: it’s not a large number. It’s not so unmanageable a number as to make the problem unsolvable.

In 1978, when this homeless man was seven years old, this is what the ESRI was saying: “Despite our technological advances and growing affluence many homeless people lead lives of great misery and despair. These are the “winos”, the “bums”, the dwellers in skid row, that central city nether-region of deserted buildings, parks, crypts and large impersonal hostels. The statutory services find it hard to cope with the needs of these people because their problems are so total, motivation to change has long since vanished, anti-social attitudes have become entrenched and community prejudices are so strong. Voluntary organisations bring with them a greater flexibility and more personalised approach to the problem but even these tend to avoid contact with a certain group of difficult and apparently unmanageable people.”

By 2014, the man who was found dead in Molesworth Street had grown up to be one of these vulnerable people. Simon’s Sam McGuinness stated in response to the death: “It’s a slow death on the street. Everybody who is on the street is, in some way, fading.”

For these people dying on our streets, we need new thinking. It’s not enough to match up the number of “homeless” to the number of hostel “beds”. These people need sanctuary and, in its purest sense of safety, asylum.

I’m not saying these people should be in psychiatric hospitals, but before the late 1980s and 1990s when long-term psychiatric patients were decanted, often unsupported, into the community to live, people deemed to be a danger to themselves would be committed and taken off the streets – at least for the winter. I saw them on visits to that huge institution that was St Brendan’s; and existence there was nothing to brag about, but as a psychiatrist said to me at the time, there was no alternative for many, because they were incapable of living on their own.

This isn’t just a housing problem. The need for broad supports is highlighted day after day, year after year, by Alice Leahy of Trust; by Sister Stan of Focus; and by Simon. The “problem” of 160 street-sleepers slowly dying before our eyes could be solved today if they were simply taken into HSE care for mental and physical health reasons (some of them do, already, sleep in A&Es). If they were dying of Ebola, not homelessness, the HSE would snap them up sharpish.

In 1971, Erskine Childers, replied to Noël Browne’s comments that homelessness wasn’t a Department of Health problem, it was a local authorities housing problem.

The same arguments go on today, even though addressing homelessness could require a multi-agency approach with 24-hour staffing, psychological support, addiction treatment, food, light and heat. The cost? It’s only 160 people. It can’t be that much. Dún Laoghaire is spending €2.5 million on an urban beach. An endangered turtle is being flown from Galway to the Canaries.

Surely, instead of just walking by fading, dying and even dead homeless people, someone can find a couple of million so that the man who died on Molesworth Street is the last homeless person to die on the street this year.