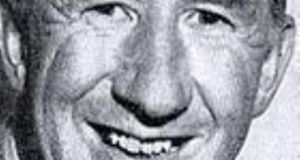 The writer Nevil Shute is best remembered today for well-plotted novels including A Town Like Alice and On the Beach, which sold hundreds of thousands of copies in the 1950s. Less well known is his role decades earlier in the Easter Rising, and a real-life plot twist that terrified his mother.

Only 17 then and still going by his full name, Nevil Shute Norway, he was a temporary resident of Dublin because his father, Arthur Hamilton Norway, had been for several years the head of the Irish postal service, based in the GPO.

This ensured the family a very intimate view of the events of April 1916. And their experiences were preserved for posterity by the future novelist’s mother, who wrote one of the more remarkable books of the period, albeit by accident.

Her accounts started out as private letters to family members back in England. But their immediacy, and the unparalleled drama of their subject matter, demanded wider publication. So although it’s a slim volume, The Sinn Féin Rebellion As I Saw It by Mrs Hamilton Norway has since taken its place among the Rising’s compulsory texts.

He was absent, having earlier volunteered to work with a Red Cross unit combing the streets for the wounded. His parents had agreed to this as less dangerous than the freelance street-combing he had been doing alone.

But mid-dinner, Arthur Hamilton Norway was called to the telephone to hear a voice he didn’t recognise, and a terse message. “You must not expect to see or hear from me until this is over”, it said. When Hamilton asked who the speaker was, he was told “your son”. And when he asked where the call was from, a voice said “the Castle”, then hung up.

There followed an hour of great consternation, as the couple tried to work out what the dire-sounding communication meant.

Their presumption was that the boy had fallen into rebel hands, had smuggled the one-line message out somehow, and that a friend in Dublin Castle had passed it on.

In fact, he was himself in the Castle, safe, having returned there with the Red Cross unit. And it had been him on the phone attempting to explain this. Realising he wouldn’t get back for dinner, he was trying to warn his parents, lest they worry.

But with the usual communication skills of a teenage boy talking to adults, combined with a censorship that limited his message to a single sentence, delivered in the close presence of a supervisor, he had tensed up. So his attempt to relieve his parents’ worries translated into something that sounded like a ransom demand in a stranger’s voice.

By Thursday night, the view from her hotel window was almost apocalyptic: “It was the most awe-inspiring sight I have ever seen,” she writes the morning after. “It seemed as if the whole city was on fire, the glow extending right across the heavens, and the red glare hundreds of feet high, while above the roar of the fires the whole air seemed vibrating with the noise of the great guns and machine-guns.”

Whether the Rising made as big an impression on Nevil Shute, I don’t know. His novels mainly concern the English middle classes of which he was a member, or the Australia in which he finally settled. True, one of his books has a (good-natured) dog called “Dev”. But, alas, the speech he gives his occasional Irish characters sounds like bad second-hand Synge.

Still, it’s a good thing he survived the Rising, and not just for popular literature. Like so many other families, his had already lost a son in fighting elsewhere. Frederick Hamilton Norway had also been a teenager in Dublin. He was a student at Trinity College when war broke out. He enlisted immediately and was fighting near Boulogne when fatally injured by a shell, 100 years ago this weekend.

3 How supermarkets trick us into buying unhealthy food, and what we can do about it