1916 centenary a time for reflection not celebration 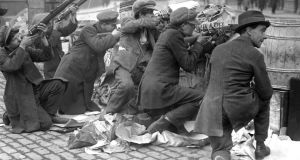 Manning the barricades during the Easter Rising – “independence was secured by violent struggle, in which most of those killed were Irish”. – Photograph: Walter Doughty, the Manchester Guardian’s first staff photographer.

The Easter Rising was indeed the catalyst for the creation of an independent Irish State, as Ronan Fanning wrote in the concluding article of The Irish Times series on 1916, but does that mean we should be proud of it?

The event itself was an act of armed rebellion by an extremist group outside the mainstream of nationalist politics, and with no electoral mandate. It came at a time when the state – the United Kingdom of Great Britain and Ireland – was in all-out war with Germany. That war had the overwhelming support of Ireland’s democratically elected representatives to the UK parliament. The leaders of the rebellion had sought and received aid from Germany.

The rebels no doubt showed bravery in openly, and in uniform, confronting the authority of the state and its armed forces. Even before the executions there were signs of some public sympathy, even admiration, for their courageous stand in the face of inevitable defeat. But they were still ideologues with no electoral support, prepared to kill and destroy in pursuit of their political aims at a time when unprecedented progress, albeit stalled by the war, had been made by democratic processes towards the goal of an independent Ireland.

Should a state with a long history of sporadic armed challenge to its authority be celebrating such an event? Should it do so when there are still organisations and individuals who believe their political aspirations are such that they entitle them to kill and destroy in pursuit of them?

Most praise of the Rising in the Irish Times series is based on its undeniable role in the rapid achievement of independence for most of the island. Thus the desirable end justifies the illegal and undemocratic means?

The Rising ensured independence was secured by violent struggle, in which most of those killed were Irish. That violent legacy was evidenced even more tragically in the fratricidal Civil War, when once again the ideologues believed the virtue of their ideals counted for more than the will of the majority. The long shadow of the gunmen of 1916 has helped inspire IRA campaigns in practically every decade since 1922, and still does so today.

The Rising, it could be argued, was a catalyst to partition, in that it did not deliver an independent united island. Partition was on the agenda before 1916, but the insurrection made it inevitable. It was the men of 1916, five years on in the treaty negotiations, who maximised their demands for a degree of independence that ensured that partition would be both a physical border and a greater border between minds.

Much is written of the failure of post-independence politicians to live up to the ideals of the men of 1916, but those politicians were themselves “men of 1916”. Some were veterans of the event, almost all, in both major parties, claimed its mantle. They still do. Now Sinn Féin is again a major party, with, in many ways, a stronger claim to that mantle.

The centenary is surely a time for reflection, not celebration. Dennis Kennedy is a former deputy editor of The Irish Times