Proponents of the Transatlantic Trade and Investment Partnership say it will boost economies – Ireland’s in particular. So why are people so suspicious of it? 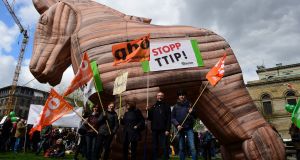 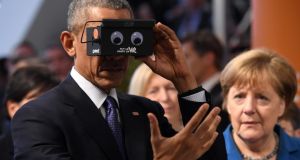 Reality check: President Obama tries a virtual-reality headset on a visit to a trade fair in Hannover with Angela Merkel. Photograph: Alexander Koerner/Getty

It was June 2013 and Ireland was nearing the end of its six-month presidency of the European Union. At a meeting in Luxembourg, the then minister for trade Richard Bruton hailed an historic agreement. After months of behind-the-scenes negotiations, led mostly by Irish officials, EU member states had agreed to open talks with the US on an ambitious trade agreement.

A last-minute attempt by the French to exclude the heavily-subsidised French film industry from the negotiating mandate threatened to derail the sensitive talks at the 11th hour. Following tense negotiations, the rest of the EU’s member states bowed to French’s demands for “l’exception culturelle”, and the deal was done. EU trade ministers signed on the dotted line.

Three years later the EU-US trade deal is reaching a crucial phase. Experts on both sides of the Atlantic agree that a deal must be reached before the end of US president Barack Obama’s term. If not, plans for creating the world’s largest trade pact will be kicked down the road into the mandate of the next US president, with little hope of agreement in the near term.

A brief history of TTIP

In fact TTIP is not the first attempt by the EU to forge a formal trade pact with the US. Previous initiatives such as the New Transatlantic Agenda in 1995 and the Transatlantic Economic Council in 2007 tried and failed to formalise a trade deal – ‘ a warning, perhaps, of the political pitfalls that lay ahead for TTIP.

The political impetus for the current EU-US trade negotiations arose from the global financial crisis in 2008/2009. With economic growth and banking systems stalling on both sides of the Atlantic, and increasing alarm at China’s economic growth, the idea behind TTIP was to reduce the barriers to trade between the EU and US, to create the world’s biggest free-trade bloc and stave off the rise of rivals such as China.

So what exactly is TTIP?

As a result, most of the barriers that TTIP is seeking to remove relate to regulations and standards rather than duties on goods and services.

To many this is TTIP’s Achilles’ heel in terms of public support. Just as those advocating for Britain to stay in the European Union find it difficult to articulate the economic benefits of the single market as opposed to, say, the hard cash that the British exchequer contributes to the EU budget, it is notoriously difficult to quantify the benefits of more streamlined regulatory standards.

Nonetheless, the European Commission boldly estimates that TTIP will boost economic growth in Europe by up to €120 billion a year. It argues that a trade agreement will stop a doubling-up of regulations and standards that add extra costs to business.

For example, a manufacturer and exporter of medical devices in Cork must currently abide by two different regulatory frameworks demanded by the EU and US, which involves going through extra tests, inspections and mountains of red tape. Streamlining standards will remove these onerous obligations, reducing the costs to business, according to the pro-TTIPers.

A Tipperary builder in California

But the flipside is that, if the EU persuades the US to open up its highly protected public procurement markets that are mainly controlled at state level, this would allow a contractor in Tipperary, for example, to compete for a contract to build a road in California.

Other changes under negotiation in TTIP include increasing the percentage of a US company an EU shareholder is permitted to own, and permitting European professionals to work in the US more easily.

The obvious problem for TTIP, however, is the fear that many of the regulations that TTIP is trying to dismantle are in fact in place to protect consumer standards. Anti-TTIPers fear that a new deal could compromise the regulatory standards of goods and services available in Europe, particularly in the food sector.

While currently there is a ban on US hormone-treated beef entering the European Union, anti-TTIP campaigners fear that the EU’s standards on food production may be compromised. Similar concerns exist about allowing chicken that has been treated with chlorine into the EU.

Environmentalists have also raised concerns that genetically modified organisms (GMO) crops will creep into Europe, while similar fears have been raised about animal welfare laws.

The European Commission disputes these accusations. As the negotiations currently stand, none of these issues have been agreed under the latest set of negotiations, and, as with all trade deals, the most sensitive issues will be left until last.

But the public outcry and sensitivity over the issue, particularly in Germany, are indicative of the huge challenge ahead to secure public support for the deal.

The 13th round of talks finished last month in New York, with the next round scheduled for July. TTIP has been dogged by accusations of secrecy since the negotiations began, tapping into a broader public disquiet about the “democratic deficit” between the EU and the people it is supposed to represent.

Among those who have raised questions about the process is EU Ombudsman Emily O’Reilly. In 2014 she launched two investigations into the EU council and commission over a lack of transparency around the TTIP negotiations, prompting the commission to make more of the documents publicly available.

MEPs in particular have claimed that secrecy pervades the process, criticising the practice whereby MEPs are permitted to access the documents only in a reading room in the European Parliament (the Department of Trade in Dublin has introduced a similar system).

But others claim the EU-US trade talks are the most open in history, arguing that governments every day make decisions on legislation that are not subject to open scrutiny on websites. The fact that 28 EU member states must sign off on the deal at European Council and national level will mean that the position of all 28 EU countries will be represented, they argue.

Opposition to the inclusion of an “ISDS clause” has also swelled in some countries. The arcane legislative clause known as an Investor-State Dispute Settlement clause is a feature of most trade deals, and allows companies to sue governments for breach of contracts.

In a significant sign that the European Commission is bowing to public pressure, EU trade commissioner Cecilia Malmstrom announced last year that the ISDS would be replaced by an investor court system that would resolve disputes between investors and states.

A number of reports have suggested Ireland would be one of the main beneficiaries of TTIP, due to the high level of trade between the US and Ireland. A report by Copenhagen Economics commissioned by the government last year estimated that an EU-US deal would add 1.1 per cent to GDP and create an additional 5,000-10,000 jobs in exporting sectors. The findings are backed up in a report by Ecorys Consultancy last week which estimates that TTIP would boost Irish GDP by 1.4 per cent.

But, as with most trade deals, there will be winners and losers. In particular, concerns have been raised about the impact of an EU-US trade deal on Ireland’s agricultural sector. While Irish dairy farmers are likely to benefit from any opening up of the US market, beef producers are worried that an increase in beef exports from the US (though this will be capped) could harm the Irish beef industry.

Suggestions that a referendum on TTIP would be required in Ireland have been dismissed by government officials, though a Dáil vote is likely.

The future of TTIP – will it work?

But the political climate in the US is far from conducive. A protectionist stance has emerged during the US primary presidential election campaigns, even from the traditionally free-trade Republican Party, as candidates commit to protecting American jobs.

On the Democratic side Hillary Clinton has said she will not support the recently-agreed Transatlantic Pacific Partnership (TPP) between the US and the Asia-Pacific region in its current form.

Similarly, from the EU perspective, senior French and German politicians in recent weeks have warned that they will not endorse TTIP at any cost. As the TTIP negotiations enter their final phase, positions are likely to harden and red lines be delineated.

Despite the fact that all EU member states are ostensibly committed to TTIP, ultimately political reality may dictate the outcome of the talks. With German and French elections due next year, the leaders of both countries will be highly attuned to public opinion and wary of endorsing an agreement that has little public support.

Ultimately, like many aspects of European Union policy-making, the outcome of TTIP may rest on the support or otherwise of the big EU members, particularly Germany.

As negotiations enter a final stage, Ireland’s involvement in any future EU-US trade deal is likely to be dependent on the political appetite in other member states and the US.