Welcome to the precariat: a new class born

Opinion: ‘According to economist Guy Standing, this precariat is recruited from working class, migrants, ethnic minorities and the new youthful well-educated who can’t find work’ 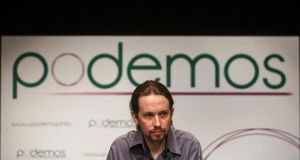 ‘Led by Pablo Iglesias, Podemus draws substantial support from the young unemployed, precariat graduates, participants in the associated Indignados social movement and from a much wider constituency disgusted with the corruption scandals afflicting the two main parties.’ Photograph: REUTERS/Andrea Comas

Precarious, precarity, precariat. These words trace a journey from the adjective meaning insecure and vulnerable, through a society in which such conditions are generalised, to a collective noun indicating that a new class is being forged from precarious workers.

According to Guy Standing, an economist in the University of London and the International Labour Organisation, this precariat is becoming more characteristic of 21st century capitalism based on flexible, periodic and insecure employment, transiency, lack of control over time, over-qualification and uncertainty. It is recruited from the traditional working class, from denizens – migrants, asylum seekers and ethnic minorities – and especially from the new youthful well-educated who cannot find stable work.

The terms resonate and appeal in a period when structural “reform” reduces job security, budget “consolidation” undermines social protection and the resultant prolonged austerity causes youth unemployment to soar in Europe. In Spain 53.7 per cent of people under 25 are unemployed, while in Italy the figure is 42.9 per cent.

An opinion poll in El Pais puts Spain’s new left-wing party Podemos (“We Can”) ahead of the Socialists and the governing conservative Popular Party with 27, 25.5 and 20.7 per cent respectively. Formed to stand in the European Parliament elections when it gained 8 per cent and five seats, inspired by Latin American radicalism and led by Pablo Iglesias, a political scientist and film critic, Podemos draws substantial support from the young unemployed, precariat graduates, participants in the associated indignados social movement and from a much wider constituency disgusted with the corruption scandals afflicting the two main parties.

Iglesias promises to eliminate the existing political “caste” in the 2015 general elections. His radicalism reflects the drastic collapse of trust in Spanish institutions and parties over recent years, mirrored in other southern European states. Prominent indignados slogans include “They call it democracy – but it is not” and “They don’t represent us”.

Similar demands can be found in the new Greek left-wing Syriza party, currently on 26.7 per cent in the polls, and in other members of the European United Left/Nordic Green Left group (GUE/NGL) in the European Parliament (of which Sinn Féin is also a member). So these positions and the ideas they draw on – including Standing’s – are worth close examination.

Standing makes the argument that the precariat is becoming a class for-itself and not only a class in-itself. His book The Precariat: The New Dangerous Class was published in 2011, followed this year by A Precariat Charter, From Denizens to Citizens.

Standing is scathing about the old proletariat and its associated trade unions and political parties. They represent a dying world based on a vanishing capitalism, he says, and a patriarchal and ageist one too, anxious to preserve its privileged employment. His argument is therefore fiercely contested by Marxists such as Kieran Allen, Ronaldo Munck or Jan Breman. They say his definition of the working class is too limited, that capital requires a stable workforce as well as flexible labour to make profits, that he is Eurocentric compared to the Global South where labour is inherently more precarious, and that it is ridiculous to expect such a scattered group to form a self-conscious class.

Standing’s case that the precariat is a dangerous class because it could be recruited by right-wing populist demagoguery, as in Italy and Hungary, is sound. And his 29-point charter to protect the precarious from exploitation, create a universal basic income and revive the commons is more convincing and progressive than its theoretical basis.