US set to re-open embassy in Havana for the first time in 54 years. Video: Reuters 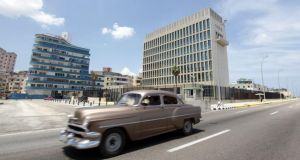 Despite the US and Cuba opening their embassies, the move doesn’t end the US trade embargo against Cuba. Photograph: Ernesto Mastrascusa/EPA

The Cuban flag was raised over Havana’s embassy in Washington on Monday for the first time in 54 years as the United States and Cuba formally restored relations, opening a new chapter of engagement between the former Cold War foes.

Cuban Foreign Minister Bruno Rodriguez presided over the reinauguration of the embassy, a milestone in the diplomatic thaw that began with a breakthrough announcement by US president Barack Obama and Cuban President Raul Castro on December 17th.

With the re-establishment of relations severed more than five decades ago, the US embassy in Havana was also officially reopened for business. But the Stars and Stripes will not be hoisted there until a visit by secretary of state John Kerry, expected next month.

While the move doesn’t end the US trade embargo against the Caribbean island, it brings the former adversaries the closest they have been since the waning days of president Dwight D Eisenhower’s administration.

Restoring ties “begins a new stage, long and complex, on the way to the normalisation of relations, which will require the willingness to find solutions to problems that have accumulated over five decades,” Cuban president Raul Castro said in Havana last week.

While companies from JetBlue Airways to Airbnb have sought to capitalise on the improving relationship, differences over issues from human rights and democracy to the future of the US naval base at Guantanamo Bay remain.

“It’s hard, because there’s been so much mistrust between the two sides, maybe even dislike, and so many things that Cuba feels put upon: Guantanamo, the migration policy,” said Vicki Huddleston, former head of US Interests Section in Havana, which has provided consular services in the absence of an embassy.

US officials reject the notion that they plan to hand over the Guantanamo base to Cuba.

Attempts to end the trade embargo, meanwhile, will struggle in a Republican-led Congress.

Senator Marco Rubio of Florida has said he will block any nominee Mr Obama proposes for ambassador to Cuba.

That means Jeffrey DeLaurentis, a civil servant who becomes interim charge d’affaires, will be the top US diplomat on the island.

“Throughout this entire negotiation, as the Castro regime has stepped up its repression of the Cuban people, the Obama administration has continued to look the other way and offer concession after concession,” Mr Rubio said in a July 1st statement.

Charles Barclay, who served as deputy chief of mission for the US Interest Section in Havana from 2009 to 2012, said he expects US diplomats to have more access to Cuban government officials and greater freedom to roam around the country, instead of being confined to Havana.

The move has political benefits to both leaders, he added, as Mr Castro seeks to improve the country’s image for investors and Obama ends what he has described as a “failed policy” for the US.

“I don’t know how much momentum this creates for more progress, but I wouldn’t downplay the significance of the symbolism here,” Mr Barclay said of the embassy openings.