Venezuela: Phone lines and water supplies down in mass blackout 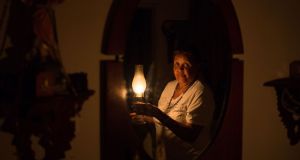 Venezuelan Elvia Helena Lozano with a kerosene lamp at her home in Caracas during the mass power outage. Photograph: Cristian Hernandez/AFP/Getty Images

Authorities in Venezuela were still struggling to restore electricity on Sunday, following the massive blackout that hit the crisis-stricken South American country on Thursday evening.

Though power cuts have become frequent events in recent years as a result of an economic crisis, Thursday’s blackout was unprecedented due to its geographical reach and duration.

By also cutting off much of the country’s telecommunications networks and provoking water cuts, the blackout was another blow for embattled populist leader President Nicolás Maduro who is facing efforts to oust him from power amidst deepening economic chaos and increasing political repression.

He quickly blamed the problem on the “electricity war announced and led by US imperialism” which he accused of directing “electromagnetic and cyber attacks” from abroad.

The breakdown that plunged most of the country into darkness originated at the Guri hydroelectric plant, the second biggest in the Americas, and responsible for most of Venezuela’s electricity supply.

There were reports of a series of deaths caused by the power shortages with people taking to Twitter to tell of patients dying in hospitals unable to operate vital equipment.

Authorities scrambled to restore power as quickly as possible but often regions that got their electricity back, including parts of the capital Caracas, soon fell into darkness again. Other regions reported no power at all since Thursday evening.

The blackout cut off much of the country’s phone network and caused internet traffic to collapse by 96 per cent. There were also reports of widespread water shortages as water plants lacked enough power to operate, with video posted on social media of people bathing in city drains in the state of Lara.

Many backup generators, installed to mitigate the impact of frequent power cuts, were unable to be used due to a lack of diesel. Despite having the world’s largest oil reserves, Venezuela has been facing increased fuel shortages due to the authorities’ catastrophic mismanagement of the country’s refineries which has left them operating far below capacity.

US sanctions unveiled in January cutting off the export of US refined products have exacerbated the problem, heightening the long-standing tensions between Washington and Caracas. Venezuela’s communications minister Jorge Rodríguez claimed he had evidence of US senator Marco Rubio’s participation in sabotage against the Guri plant.

But Venezuelan electrical engineers have long warned that the Maduro regime’s political mismanagement of the sector and failure to fund vital investments have brought the national grid to the brink of collapse.

Ruinous incompetence exposed by the decline in the the oil price has seen Venezuela’s economy roughly halve in size since Maduro came to power in 2013, causing hunger and accelerating an exodus that has now forced 3.4 million Venezuelans to flee their country.

Speaking on Saturday at an opposition rally Juan Guaidó, who declared himself president in January in opposition to Maduro – and has since been recognised as such by more than 50 countries – ridiculed the regime’s explanation for the blackout saying it has “run out of excuses”. He also called on opposition supporters from around the country to gather in Caracas for a mass rally against Maduro, but did not provide a date for the demonstration.

At Saturday’s rally Guaidó also ruled out calls from other opposition leaders to cite the chaos caused by the blackout as justification for invoking the United Nations’ “responsibility to protect” principle in cases of genocide, war crimes, ethnic cleansing and crimes against humanity in order to justify seeking foreign military intervention to remove Maduro.