Wisconsin backlash against Donald Trump as he trails in poll

US Republican presidential front-runner Donald Trump suggests that 'there has to be some form of punishment' for women who undergo abortions in America. Video: MSNBC 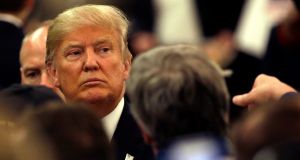 The danger signs are mounting for Donald Trump in Wisconsin: right-wing radio hosts are flaying him, governor Scott Walker and other elected Republicans have endorsed Senator Ted Cruz and a new poll showed Cruz with a 10 percentage-point lead in the state before next Tuesday’s primary.

The Stop Trump movement may never have another opportunity like the one in Wisconsin, where resistance to Trump was running high even before his campaign became consumed by a new round of controversies, from his mocking of Cruz’s wife to the arrest of his campaign manager to his comments in favour of punishing women who get abortions.

If Trump is dealt a setback in the Wisconsin primary, including a potential sweep by Cruz of all 42 delegates, it would be his most prominent reversal since his second-place finish in the Iowa caucuses in February. It would also show Trump’s vulnerability before the race moves to New York and other northeastern states.

The state’s Republican establishment, cohesive and battle-tested after years of partisan warfare under Walker, has dug in to support Cruz – not out of true love for the Texas senator, but in a marriage of convenience to halt Trump, whose temperament and conservatism many doubt.

At the same time, though, if the forces arrayed against Trump do not prevail in Wisconsin, they are unlikely to slow Trump in the ideologically more favourable turf of the east, increasing his chances of locking down the nomination before the Republicans’ July national convention.

A poll released on Wednesday by Marquette University Law School showed Cruz leading the Republican field with 40 per cent and Trump with 30 per cent, a reversal from a month earlier when Trump held a 10-point lead. Governor John Kasich of Ohio was in third, with 21 per cent.

A Cruz victory would suggest that a backlash against Trump has set in after a series of nasty episodes, including his insults of Heidi Cruz and the arrest of Corey Lewandowski, Trump’s campaign manager, on a charge of manhandling a female reporter.

Cruz went further than ever before on Tuesday during a CNN town hall in Milwaukee, where he suggested he would not support Trump if he became the party’s nominee. “It’s gotten really ugly,” Cruz said. “What lesson do our kids take watching us?”

Earlier he said the battery charge filed in Florida against Lewandowski should be “a fireable offence”. With Trump adamantly defending Lewandowski as the victim in the encounter, after video evidence contradicted the manager’s earlier charge that the reporter was “delusional”, Cruz said that nominating Trump “would be an absolute train wreck”.

In the Marquette poll, conducted before Lewandowski’s arrest, only 24 per cent of women planning to vote in the Republican primary backed Trump, fewer than for the other two candidates. Still, Trump has many advantages in Wisconsin, including its large number of white working-class voters, a group that has flocked to him throughout the campaign, and a passionate base of supporters for whom he can do no wrong. He plans a heavy schedule of appearances through the weekend.

Thousands waited more than two hours on Tuesday to hear him in Janesville during the candidate’s first visit to the state. At the rally, he belittled Walker for his record and even his love for Harley-Davidson motorcycles. “He doesn’t look like a motorcycle guy to me, I’m sorry,” Trump said to laughter.

Neither women nor men waiting to hear him, many of whom bought Trump hats, buttons and shirts from vendors working the crowd like a Green Bay Packers game, said they were unsettled by Trump’s derogatory remarks about women. “I think he calls ’em as he sees ’em,” said Mae Pospeschil, a title searcher from Beloit.

Unlike in neighbouring Illinois and Michigan, midwestern industrial states where Trump had strong victories, the race in Wisconsin is much tighter, in part because of sharp regional differences among Republicans. Voters in the Milwaukee suburbs, the reddest counties in the state, hold highly negative views of Trump, according to a polling analysis by the Milwaukee Journal-Sentinel. Voters in northern and western counties are more slightly favourable to Trump, the Marquette poll showed.

Ed Goeas, a pollster who works for a super Pac – a fundraising political action group – opposed to Trump, which is hammering him with television ads in Wisconsin for insulting women, said married Republican women were turning against the New York businessman. “I see an opportunity for us to have Trump walk out of there with no delegates,” Goeas said.

With no Republican nominating contests for two weeks after Wisconsin votes, a Trump defeat could change the tenor of the race. “The narrative that comes out of Wisconsin has a huge impact,” Goeas added. – (New York Times service)