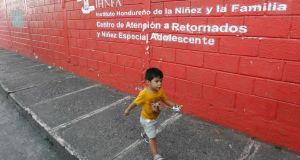 A child deported from Mexico walks toward his mother outside the Honduran Centre for Returned Migrants in San Pedro Sula in northern Honduras. Photograph: Reuters/Jorge Cabrera

The White House is preparing an emergency request to Congress for more power to allow fast-track deportation of tens of thousands of unaccompanied children from Central America who cross the US border illegally.

The move could bypass protection introduced by the Bush administration.

President Barack Obama has called the surge of minors pouring across the Mexico border into the Rio Grande valley a “humanitarian crisis” and has already ordered officials to open emergency shelters at military bases and increased the number of border agents.

But in a significant toughening of stance, to be announced formally today, the administration is to request authority for immediate repatriation of children from Guatemala, Honduras and El Salvador. Most have been arriving from these three Central American countries.

A White House official said Congress would be asked to provide the US homeland security department with “additional authority to exercise discretion” to deal with children from those countries.

More than 52,000 unaccompanied children have been stopped at the border since the start of October. Officials said they were alarmed by the increased numbers, many of them girls under the age of 13. Border officials say some children as young as four or five travelling alone.

The administration has had to adhere to anti-trafficking laws passed during the presidency of George W Bush which set out protocols for handling unaccompanied minors and which had the potential for delaying deportation.

Unlike migrants from Mexico and Canada, children from countries without a border with the US, including Guatemala, Honduras and El Salvador, are first screened by a US border control agent. These have a limit of 72 hours for detaining the children, who are then transferred to the office of refugee resettlement, part of the US human services department. The department is required to “act in the best interest of the child”, which often means sending them to foster care or a relative in the US.

Estimates for the percentage of Central American unaccompanied migrants (excluding Mexicans) who are united with US-based sponsors ranges from 65 per cent to 90 per cent. But they remain in the removal process, and have their case heard by a judge, who has the discretion of deportation.

The Obama administration is trying to counter a perception that unaccompanied children who arrive in the US are guaranteed the chance to stay.

The rule change would in effect mean that children from Guatemala, Honduras and El Salvador would be treated the same as Mexicans – who are often sent back across the border soon after being detained.