AT&T will gain access to 40m digital TV customers in US, Latin America if agreed 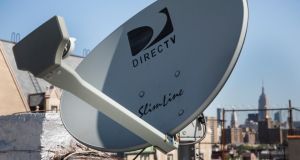 A $48.5 billion (€35.3 billion) deal by US telecoms company AT&T to buy America’s largest satellite TV provider DirecTV is the latest proposed merger in a consolidation of the US television industry.

The merger, approved by the boards of the two companies on Sunday, will strengthen AT&T’s ability to offer more products to grow the company’s customer base and is seen as a response to the pending $45 billion deal by Comcast, the largest US provider of pay-TV, to take over Time Warner Cable.

By acquiring the second biggest pay-television provider, AT&T would gain access to 40 million digital television customers in the US and Latin America if the deal is approved. The value of the acquisition, the second major American media deal this year, rises to $67 billion when DirecTV’s debt is included.

Attractive deal
For the telecoms giant, the deal is attractive as it would allow the company to offer bundles of phone, high-speed broadband and pay-TV subscriptions that would enable the business to grow among consumers who are turning in greater numbers to the internet for communication and entertainment.

The acquisition would give AT&T greater negotiating power with television programmers and, as the second largest US mobile telecoms provider, would help bring more video content to mobile customers.

DirecTV’s interest in the deal, details of which first emerged in a Wall Street Journal report at the start of this month, stems from the company’s unclear future growth as customer subscriptions level off with online content providers such as Netflix and Amazon Prime winning over subscribers.

“This is a unique opportunity that will redefine the video entertainment industry and create a company able to offer new bundle and deliver content to consumers across multiple screens – mobile devices, TVs, laptops, cars and even airplanes,” AT&T chairman and chief executive Randall Stephenson said.

The deal, which the phone company will fund with cash, asset sales and loans, will pay DirecTV shareholders $95 a share, comprising cash of $28.50 per share and $66.50 per share in AT&T shares.

With consumer groups bemoaning the Comcast-Time Warner Cable deal and the effect of merging America’s two biggest cable and broadband internet providers on customer charges, US regulators will also scrutinise the potential impact of this latest proposed deal closely on subscription fees.

AT&T’s U-Verse television service, which has about 5.7 million customers in 22 American states, directly competes with DirecTV but is not a significant rival, which may curry favour with regulators.

Dominant position
Even if both deals are approved, Comcast will hold a more dominant position in a more valuable market with a 40 per cent share of American broadband internet customers, and have the added edge of owning a content provider in NBC Universal, which owns a film studio and several cable channels.

These may not be the final mega-deals this year.

US mobile telecoms provider Sprint is trying to buy rival T-Mobile in a transaction worth an estimated $30 billion that would combine the third and fourth biggest US wireless carriers in a third mega-acquisition affecting tens of millions of US customers.

1 ‘I thought it was a hoax’: Patient dies after Texas Covid party
2 US passengers fly into Dublin: ‘I’m here for six days. I guess I’ll have to stay inside’
3 Johnny Depp tells court Amber Heard threw ‘haymaker’ punch at him
4 Maureen Dowd: Biden has his limitations but he’s no Trump
5 Covid-19: Most passengers arriving from US are Irish coming home - Coveney
Real news has value SUBSCRIBE