US midterms: ‘Republicans didn’t win as big as you think they did’

Analysis: If this election was a referendum on Obama, it has proven to be inconclusive 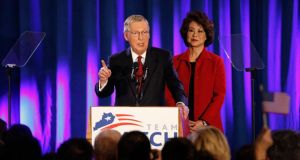 “Just because we have a two-party system doesn’t mean we have to be in perpetual conflict,” Mitch McConnell, the presumptive new Senate majority leader, said in his victory speech last night. Photographer: Luke Sharrett/Bloomberg.

In the end, there was no Republican wave. Indeed, it was barely a ripple.

The Republicans won the US midterms, there’s no denying that, but they didn’t win big.

This election cycle included not only conservative-friendly states but a disproportionate number of competitive states in which incumbent Democrats were stepping down. Democrats have not won Louisiana or Arkansas in a presidential election since 1996, Georgia since 1992 and Alaska since 1964.

A Democrat loss in these places is no great surprise. They were low-hanging fruit, and Republicans expended a lot of energy and even more money trying to get to it.

The GOP fared better last night than it did in 2010, two years after which Barack Obama beat Mitt Romney. States where Democrats unexpectedly struggled, like Virginia or Florida , in the governor’s races, are swing states that are always in play.

This election was not a referendum on Obama. Or if it was, it was inconclusive. He is as much the president in New Hampshire, where Democrats won a Senate seat, as in Colorado and Georgia, where they lost. But the midterms were a reflection on Obama’s presidency. His second term has lacked purpose and direction as it has lurched from crisis to crisis, many of which - the NSA, the IRS, White House security - have been self-imposed.

Where he has taken a stand, like on gun control after the shootings in Newtown, Connecticut, Obama was unable to achieve legislative change. Where he has not taken a stand, as with immigration reform , he is being punished for it.

Polling shows the public actually backs Obama rather than Republicans on key issues, including mending rather than repealing Obamacare, immigration reform, increasing the minimum wage, same-sex marriage and a host of other issues. The problem is few people have any confidence that Obama will actually get any of them done.

Still, 2014 was hardly an endorsement of the Republicans. That they have now taken control of the Senate marks a substantial change in terms of leadership but not a particularly consequential one in terms of legislation. The Republicans will emerge with only a small majority, and if the party’s recent experience running the House of Representatives is anything to go by, the GOP is likely to be a dysfunctional caucus and anything Republicans do come up with that is unpalatable to Democrats, the president still holds a veto.

Obama at times has proved himself in negotiations to possess the spine of a jellyfish, but unless he caves, nothing much more will get done this session than during the previous one. Only this time the excuses will be different.

Instead of Democrats blaming House Republicans for refusing to compromise, Republicans will blame Obama for thwarting the will of Congress.

“Just because we have a two-party system doesn’t mean we have to be in perpetual conflict,” Mitch McConnell, the presumptive new Senate majority leader, said in his victory speech last night. “I think I’ve shown that to be true at critical times in the past. I hope the president gives me the chance to show it again.”

According to a CNN exit poll , eight in 10 Americans disapprove of how Congress has been handling its job, while almost six in 10 are displeased with Obama.