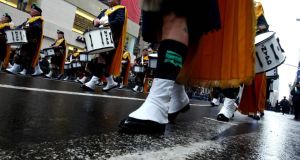 The mayor of US city Hobokon, Dawn Zimmer, wants the celebrations be held on a weekday to avoid excessive drinking.

The mayor of Hoboken in New Jersey has cancelled this year’s St Patrick’s Day parade due to the drunken behaviour and rowdiness it led to on previous occasions.

Mayor Dawn Zimmer reiterated her opposition to the event this week, saying the celebrations should be held on a weekday to avoid excessive drinking.

In 2011, Ms Zimmer wrote to the local Patrick’s day parade committee informing it of her decision that future parades could only be held on a Wednesday. “Residents and business owners suffer significant property damage and crime spikes to unacceptable levels, parents are afraid to let their children play outside, and many residents simply feel forced to leave town or close their businesses for the day,” she wrote in a letter published on the committee’s website.

She argued that by holding the parade on a weekday, people would be less inclined to drink heavily. Ms Zimmer’s decision was supported by the Philadelphia-based Irish Anti-Defamation Federation who called the behaviour surrounding the parade “distasteful” and “crime ridden”.

The Hoboken parade committee responded to the letter, stating they would not bring the matter to court but would consider invitations from other communities in New Jersey to join their St Patrick’s Day marches.

The committee rejected Ms Zimmer’s suggestion to hold the parade during the week, saying: “We love our city too much to lower ourselves to the level of those who speak from a place of ignorance and ethnic/religious intolerance.”

John Howe, a former police officer and grand marshall for the parade in 1997, accused the mayor of holding “resentment” towards the Irish community.

Two years on, the organisers still refuse to hold the celebration on a weekday, insisting the parade must be held on the traditional Saturday before St Patrick’s Day.

Meanwhile, Hoboken locals have found an alternative way of celebrating the day by creating the ‘Lepre-Con’ - a pub crawl unconnected with the parade where participants dress in green and visit dozens of bars around the city.