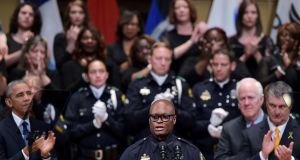 Dallas police chief David Brown speaks during a memorial service for the victims of the police shooting in Dallas, Texas. When asked, as an African-American police officer how to bridge the divide between the two, the self-effacing Brown turned to humour. Photograph: Mandel Ngan/AFP/Getty Images

At one of the many press conferences he held in the wake of the murders of four of his police officers and a transit cop – the deadliest day for US law enforcement since 9/11 – Dallas police chief David Brown had simple words to soothe racial tensions between police and the black community.

When asked, as an African-American police officer – a representative of the black and the blue – how to bridge the divide between the two, the self-effacing Brown turned to humour. “So I’ve been black a long time . . . it is not so much of a bridge for me, it’s everyday living,” he told reporters on Monday.

The 55-year-old police chief, who grew up in a tough neighbourhood of Dallas, went on: “It’s my normal to live in this society that had a long history of racial strife. We are in a much better place than we were when I was a young man here. But we have much work to do, particularly in our profession, and leaders in my position need to put their careers on the line to make sure we do things right, not be so worried about keeping their job.”

In a week when leaders had to step up to manage the fallout from the latest violent interactions between police and black Americans, Brown stood head and shoulders above the rest. Not only was he having to help the families of the five slain police officers and the nine officers who survived, but he was front and centre in the raging national debate about who and what was to blame.

The president’s words in Dallas – despite a masterful speech rejecting the idea of racially torn country as “not the America I know” – will be inadequate too. Obama instead called for action. He pointed to the example of Dallas mayor Mike Rawlings and Brown – “a white man and a black man with different backgrounds” – working not just to restore order and support a shaken city but “to unify a city with strength and grace and wisdom”.

Brown’s own story is extraordinary. After college in the early 1980s he witnessed the crack cocaine epidemic in his home neighbourhood and “wanted to do something rather than just complain about what was happening”, he told the Dallas Observer. He became a cop in 1983.

In 1988, he responded to the shooting of an officer and found on the ground at the crime scene a familiar pair of glasses. They belonged to his former police partner, Walter Williams, a 47-year-old father of three. Brown was there in the hospital when the Williams children were told about their father.

“I can’t deny that’s a part of who I am,” Brown told the Dallas Morning News. “The families of victims, I know what they go through.”

In 2010, on Father’s Day, Brown’s 27-year-old son, also named David, who was bipolar and high on drugs, fatally shot a civilian and a police officer before he was killed by police responding at the scene. It was just weeks into Brown’s term as chief.

Personal grief has steeled Brown in his work. Dallas has one of the best records in terms of reforms. During his time in charge, the city has reduced the number of police-involved shootings from 23 in 2012 to 11 in 2015.

Brown disclosed to reporters on Monday that he and his family had received death threats immediately after the former US army reservist Micah Xavier Johnson went on his killing spree in downtown Dallas nine days ago.

Asked about the Black Lives Matters protesters against fatal police shootings, he urged them to apply for a job in the police force.

“We’re hiring,” he said. “Get out of that protest line and put in an application. We’ll put you in your neighbourhood and help you resolve some of those problems.”

He pointed to his own background in showing how Dallas can bounce back from America’s latest gun atrocity.

“They took an inner city kid like me with flaws and made me their police chief,” he said.

Brown is not just the best recruitment ad for a cop in America, but also for the kind of lead-from-the-front action that can help heal the country’s racial anger.