US election: Trump and Cruz split victories in four states 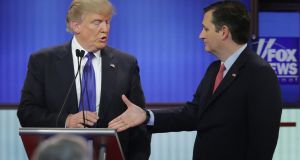 The results were a repudiation of a Republican establishment that has bristled at the prospect of either Mr Cruz or Mr Trump winning the party’s nomination and has largely lined up behind US senator Marco Rubio of Florida, who was shut out in all four contests.

“I think it’s time that he dropped out of the race,” Mr Trump said of Mr Rubio after the contests. “I want Ted one on one.”

Mr Cruz won Kansas and Maine on Saturday, while Trump won the bigger states of Louisiana and Kentucky, holding onto his lead in the race for the Republican nomination for the November 8th presidential election, even though Mr Cruz captured more delegates on Saturday.

The next big contest, and a crucial one, will be Tuesday’s primary in the industrial state of Michigan. Republicans in three other states, Mississippi, Idaho and Hawaii, also will vote on Tuesday. Puerto Rico Republicans will vote on Sunday.

In the Democratic race, front-runner Hillary Clinton won in Louisiana, and her rival Bernie Sanders, a US senator from Vermont, won in Kansas and Nebraska, in results that did not substantially change Ms Clinton’s big delegate lead.

Mainstream Republicans have blanched at Mr Trump’s calls to build a wall on the border with Mexico, round up and deport 11 million undocumented immigrants and temporarily bar all Muslims from entering the United States.

But the party’s establishment has not been much happier with Mr Cruz, who has alienated many party leaders in Washington, than they have been with Mr Trump.

“It looks like it will be the angry Trump voters against the purist conservative Cruz voters,” said Washington-based Republican strategist Ron Bonjean. “The establishment is just being left out.”

A spokesman for Mr Rubio, who spent the past week launching harsh personal attacks on Mr Trump, said the senator would push on with an eye on the March 15 winner-take-all contest in Florida.

“After we win the Florida primary, the map, the momentum and the money is going to be on our side,” spokesman Alex Conant said in a statement.

Mr Cruz, a first-term US senator from Texas who has promoted himself as more of a true conservative than Mr Trump, said the results showed he was gaining momentum in the race to catch the real estate mogul.

“The scream you hear, the howl that comes from Washington DC, is utter terror at what ‘We the People‘ are doing together,” Mr Cruz told supporters in Coeur d’Alene, Idaho, after his early win in Kansas.

Mr Cruz, 45, has run as an outsider bent on shaking up the Republican establishment in Washington. A favourite of evangelicals, he has called for the United States to “carpet bomb” the Islamic State militant group and has pledged to eliminate the tax-collecting Internal Revenue Service and four cabinet agencies and to enact a balanced budget amendment.

Mr Trump has a substantial lead in the delegates needed to secure the nomination at the Republican National Convention, but since winning seven of the 11 contests on Super Tuesday he has come under withering fire from a Republican establishment worried he will lead the party to defeat in November’s election.

But endorsements from establishment Republicans have failed to sway voters. Mr Rubio won the backing of Kansas governor Sam Brownback but still came in third there.

The four Republican contests on Saturday together accounted for just 155 delegates. Cruz won 64 delegates on Saturday, while Trump took 49.

The races on Saturday were open only to registered Republicans, excluding the independent and disaffected Democratic voters who have helped Trump’s surge to the lead.

The anti-Trump forces have a short window to stop the caustic businessman, who ahead of Saturday had accumulated 319 of the 1,237 delegates needed to win the nomination at July’s Republican national convention, outpacing Mr Cruz, who had 226 delegates.

On March 15th, the delegate-rich states of Florida, Illinois, Ohio, Missouri and North Carolina will vote. Both Florida and Ohio use the winner-take-all method to allocate Republican delegates, making the stakes in those states particularly high.

If Mr Trump takes both Florida and Ohio he would be nearly impossible to overtake. There are a total of 358 delegates at stake in the five states voting March 15th, including 99 in Florida and 66 in Ohio.

On the Democratic side, Ms Clinton has opened up a big delegate lead and Mr Sanders might have a tough time making up the difference. All states in the Democratic race award their delegates proportionally, meaning Ms Clinton can keep piling up delegates even in states she loses.

The three states holding Democratic contests on Saturday had a total of 109 delegates at stake. The early estimates were that Ms Clinton, who appeared headed to a smashing nearly 50-point win in Louisiana, had won at least 48 delegates on Tuesday and Mr Sanders 37.

But Mr Sanders made it clear he was not planning to end his White House quest anytime soon.

“We have the momentum. We have a path toward victory. Our campaign is just getting started,” he said in a statement after his wins on Saturday.