The latest patient had changed planes at Heathrow airport in London 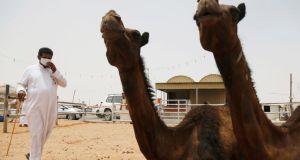 A man wearing a mask at a camel market in the village of al-Thamama, near Riyadh. Saudi Arabia said people handling camels should wear masks and gloves to prevent spreading Middle East Respiratory Syndrome (MERS), issuing such a warning for the first time as cases in the kingdom of the potentially fatal virus neared 500. Photograph: Reuters

US health officials confirmed the country’s second case of MERS, a deadly virus first discovered in the Middle East, and said the patient was in good condition in an Orlando, Florida hospital.

The patient, 44, is a healthcare worker who lives and works in Saudi Arabia and traveled to the United States to visit relatives.

He was admitted to the Dr P Phillips Hospital in Orlando on May 9th.

The case is the second “imported” instance of Middle East Respiratory Syndrome, or MERS, reaching US soil.

The first case was confirmed late last month in Indiana, raising fears about the global spread of the virus that has no treatment and kills about one-third of infected patients.

The two cases are not related, said Dr Anne Schuchat, director of the National Center for Immunization and Respiratory Diseases at the Centers for Disease Control and Prevention.

The new patient traveled on May 1st from Jeddah to London on Saudi Airlines Flight 113, then changed planes at Heathrow airport and flew from London to Boston, Public Health England said in statement.

From Boston, the patient took a flight to Atlanta, and then flew to Orlando. The CDC did not release US flight numbers.

Schuchat said the patient was feeling ill on the flight from Jeddah, but did not feel sick enough to seek treatment until last Friday.

The CDC confirmed the presence of MERS virus on May 11th.

It is not clear in which hospital the patient worked, but Schuchat said it was likely a facility that was caring for people with MERS.

The CDC said it is not clear whether the person was infectious on the plane, but it is now contacting some 500 people who traveled on the same US flights as the health worker “out of an abundance of caution,” CDC Director Dr. Thomas Frieden told reporters on a conference call.

“We think at least some of the increase in the cases we’re hearing about from the Middle East does have to do with better monitoring and tracking, and that’s a good thing,” he said.

The Florida hospital, which is located near the Disney theme park, is tracking down any of its workers who might have come in contact with the patient.

So far, 16 have been placed in home isolation.

“We do believe there is a low risk the virus is being spread,” hospital spokesman Geo Morales said, noting the patient’s symptoms were mild when he arrived and that he did not have a cough.

No changes detected in virus genome

MERS, which causes coughing, fever and sometimes fatal pneumonia, is a coronavirus from the same family as SARS, or Severe Acute Respiratory Syndrome, which killed around 800 people worldwide after first appearing in China in 2002.

The MERS virus first emerged in September 2012 and has since infected almost 500 people in Saudi Arabia. There have been sporadic cases across the Middle East, as well as in Europe and Asia.

Frieden said the latest US case of MERS was “unwelcome but not unexpected news,” and added it now falls to the US hospital and healthcare workers in general to observe meticulous infection control procedures to keep the virus contained.

The CDC now has a team in Saudi Arabia working with “international partners” to try to help contain the spread of the virus and better understand how it is transmitted, he said.

So far, an analysis of the genetic sequences of the virus suggest it has not changed in the past two years.

“That is reassuring,” Frieden said.