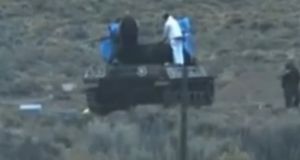 Forensic experts examine the tank which exploded at a public firing range in Oregon. Screengrab: Youtube

Two people have died in an explosion inside a Second World War-era tank at a firing range in Oregon.

Police say the explosion occurred on Tuesday afternoon at a public gun range east of Bend. Paramedics tried to revive the victims but they died from their injuries.

The authorities say there is no remaining risk to the public.

KTVZ-TV showed the tank in a field.

Detectives from the Deschutes County Sheriff’s Office and the Oregon State Police Arson and Explosives Section are jointly investigating.

1 The Sack of Balbriggan: The burning of a town that shocked the world 100 years ago
2 The FinCEN files: The billion dollar a month money trail
3 Coronavirus: 396 more cases as public is urged to help protect ‘older and vulnerable’
4 Brexit: Irish hauliers seek State help to bypass UK ‘land bridge’
5 The far right rises: Its growth as a political force in Ireland
Real news has value SUBSCRIBE