Former world heavyweight champion has died at the age of 74 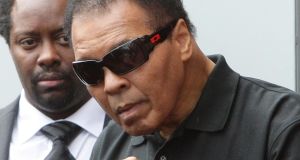 File photograph from 2009 of Muhammad Ali who has has died at the age of 74. Photograph: Dave Thompson/PA Wire

US president Barack Obama has paid tribute to Muhammad Ali saying he fought for what was right outside the ring as well as in it.

“He was a man who fought for what was right. A man who fought for us. He stood with King and Mandela; stood up when it was hard; spoke out when others wouldn’t. His fight outside the ring would cost him his title and his public standing. It would earn him enemies on the left and the right, make him reviled, and nearly send him to jail. But Ali stood his ground. And his victory helped us get used to the America we recognise today,” he said in a statement.

“In my private study, just off the Oval Office, I keep a pair of his gloves on display, just under that iconic photograph of him - the young champ, just 22 years old, roaring like a lion over a fallen Sonny Liston.

“Muhammad Ali shook up the world. And the world is better for it. We are all better for it. Michelle and I send our deepest condolences to his family, and we pray that the greatest fighter of them all finally rests in peace.”

President Michael D Higgins said the passing of Muhammad Ali will have been heard with the greatest sadness by Irish people of all generations.

“Many will remember the wit, grace and beauty he brought to boxing and some will recall his visits to Ireland,” he said.

“All over the world people also flocked to hear him offer his view on the achievement of democracy and particularly equal rights when they were so strikingly missing in some of the richest countries of the world.

He brought his message of freedom and respect for people of all races to all the continents of the world.

Today we lost the Greatest Sportsman that's ever lived #RIPMuhammadAli

The greatest has fought his final round. Muhammad Ali was the most magnificent athlete who transcended his sport. #RIP.

Until Ali no one said "I'm beautiful" he was royalty, yet common man was his pal. That is beauty. Greatest kind pic.twitter.com/uX7htKHrGc

Please keep @MuhammadAli in your thoughts and prayers. With God, all things are possible. pic.twitter.com/scABVLxroB

As a sportsman and humanitarian, and as someone who struggled for a very long time with one of the most debilitating illnesses, he offered courage in the face of great difficulties.

He was intent on going on communicating right to the very end.

He will be missed not only by his close friends and family but by those who heard him and were influenced by him, all over the world.”

Former heavyweight boxing champion Evander Holyfield told MSNBC: “I’m glad to have known Ali because when I was a kid, at eight years old, I was told I would be like Ali.

“To take it upon yourself and say; ‘I’m the greatest’, you put yourself in a position for people to take pot shots at you. This is what Ali did. It’s amazing him becoming three-time heavyweight champion of the world. At that time people thought, ‘Who could beat three?

“You have to be stronger to get up from a loss to go on and that’s what Ali proved to be.”

Former England footballer Gary Lineker tweeted: “The greatest has fought his final round. Muhammad Ali was the most magnificent athlete who transcended his sport.”

Argentinian boxer Marcos Maidana, a two-weight former world champion, tweeted: “Muhammad Ali the all-time greatest has left us. Thanks for everything. Go with God.”

Musician Wyclef Jean wrote: “I am the greatest, I said that even before I knew I was. Rest in peace to the greatest MuhammadAli #MuhammedAli we lost another legend.”

Tributes also came from figures outside the world of boxing. Ringo Starr, who met the boxer along with the other members of The Beatles in 1964, tweeted: “God bless Muhammad Ali peace and love to all his family.”

Former F1 world champion Jenson Button said: “#MuhammadAli #cassiusclay If you even dream of beating me you’d better wake up and apologize #restinpower.”