Violence in Ferguson, Missouri after grand jury announcement that a white police officer will not face charges in the August shooting death of an unarmed African-American teenager. Video: Reuters 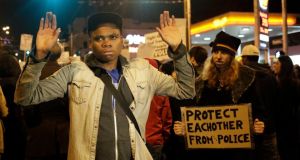 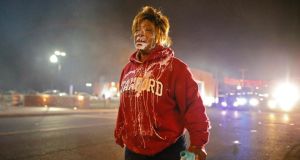 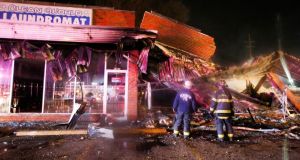 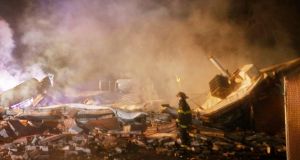 A firefighter among smoking rubble after demonstrators burned buildings in protest against the grand jury decision not to indict a police officer for shooting dead Michael Brown, in Ferguson, Missouri. Photograph: Larry W Smith/EPA 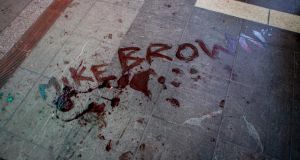 Mike Brown’s name scrawled on the ground in Times Square in New York during a demonstration in reaction to the St Louis County grand jury decision not to indict Ferguson police officer Darren Wilson. The New York Times/

The St Louis area braced for another day of protests on Tuesday after a grand jury cleared a white police officer in the fatal August shooting of an unarmed black teenager, sparking a night of violent and racially charged rioting.

Although no serious injuries were reported, Mr Belmar said the rioting on Monday night and early Tuesday morning was “much worse“ than the disturbances that erupted in the immediate aftermath of the shooting of eighteen-year-old Michael Brown by police officer Darren Wilson on August 9th.

Protests also occurred in New York, Chicago, Seattle, Los Angeles, Oakland, California, and Washington DC, over a case that has highlighted long-standing racial tensions not just in predominantly black Ferguson but across the United States.

“A large presence, very early on, will be a deterrent,” said Mr Dotson, whose jurisdiction does not include Ferguson. “We’ll have resources deployed.“

The rioting came despite calls for calm from officials ranging from Missouri governor Jay Nixon to US president Barack Obama. Activist leaders had spent weeks training protesters in non-violent civil disobedience techniques and police also had been through conflict de-escalation training, although tempers flared after crowds threw bricks at police and set patrol cars on fire in the wake of the grand jury’s decision not to prosecute.

St Louis police reported heavy gunfire late on Monday in the area near where Brown was slain but Mr Belmar said officers did not fire a shot, even after they were pelted with rocks, bottles, batteries and other debris.

“They want the police to be held accountable, to treat us like Americans, too, so we can get equal justice,“Brown family attorney Benjamin Crump said on CNN. “This system always allows police to hurt and kill our children. We‘ve got to change that dynamic.”

Attorneys for Mr Wilson said he was following his training and the law when he shot Brown. He told the grand jury that Brown had tried to grab his gun and he felt his life was in danger when he fired, according to documents released by prosecutors.

“I said, ‘Get back or I’m going to shoot you,’ ” said Wilson, according to the documents. “He immediately grabs my gun and says, ‘You are too much of a pussy to shoot me.’ ”

The grand jury of nine whites and three blacks began meeting in late August and heard testimony from 60 witnesses called by the prosecution, including medical examiners who performed three autopsies, one by a private pathologist hired by Brown’s family.

St Louis county prosecutor Bob McCulloch declined to say if the jury’s decision was unanimous. At least nine jurors would have needed to agree on indictment.

A separate federal investigation into the shooting continues and US attorney general Eric Holder emphasised the Justice Department investigators had not reached any conclusions.

McCulloch described a tangled mass of conflicting testimony about what happened in the shooting but said much of it did not square with physical evidence.

Lawyers for Brown’s family say he was trying to surrender when he was shot while Wilson‘s supporters say the officer feared for his life and fired in self-defence.

Witnesses disagreed on whether Brown’s hands were up at the time he was shot, said Mr McCulloch, adding that Wilson shot at Brown 12 times. The final shot hit the top of his head.