#TodosMarchamos (We All March) protest weekly for a democratic Cuba. They march from the same church, Santa Rita, every Sunday before being arrested by the police. Video: Simon Carswell 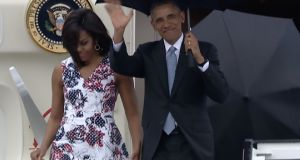 US president Barack Obama and first lady Michelle Obama arriving in Havana, Cuba, on Sunday. They were accompanied by their daughters Malia and Sasha. Photograph: AFP/Getty Images 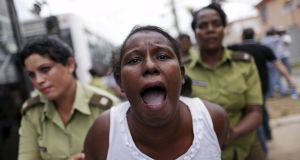 A member of the Ladies in White’ dissident group shouts as she is led away by police officers after they broke up a march of the group on Sunday, detaining about 50 people, hours before US president Barack Obama arrived. Photograph: Ueslei Marcelino/Reuters

The last US president to visit Cuba, Calvin Coolidge, landed in the USS Texas battleship in 1928 to the sound of artillery greeting his arrival.

President Barack Obama’s entrance struck a much more low-key tone. He waved and smiled as he descended rain-covered steps from Air Force One under umbrellas with his wife, first lady Michelle and daughters Malia and Sasha.

His arrival at José Martí International Airport in Havana on Sunday afternoon marks the start of a historic three-day visit.

The idea of an American president visiting the communist island state, a bitter cold war-era enemy of the United States since revolutionary Fidel Castro seized power in 1959, was considered unthinkable.

Obama is joined by four cabinet secretaries and 40 members of Congress with the aim of making the breakthrough December 17th, 2014 agreement to normalise relations between the countries “irreversible”.

The 44th US president will meet Cuban president Raul Castro, Fidel’s brother – but not Fidel – as well as with Cuban dissidents. He will deliver a televised address to the Cuban people and attend an exhibition game of baseball between the Cuban national team and the Tampa Bay Rays.

On Sunday night he was due to go on a walking tour of old Havana with the first family.

Cubans were sceptical that the visit would lead to further benefits, bringing much-needed money into the country, while tourists were fearful of the effect of the floodgate possibly being opened to capitalism.

“People have high hopes because things have been so bad but they are day-dreaming that something good will come of this,” said Jorgé, a Havana taxi driver, pleased with the extra business from Obama’s visit.

The White House has over the past 15 months been chipping away at the embargo with Cuba that needs the Republican Congress to end it.

“We joke about McDonald’s on every corner – that would be the fear,” said Jennifer Kerpelman, a professor from Alabama, visiting from the US.

“It’s about time,” said her husband Joe Pittman, also a professor, said of the decision of his country to re-establish diplomatic and economic ties.

“You wouldn’t want this country Americanised,” said Anne Marie Scully, visiting Cuba with her parents from Mallow in Co Cork. “It is almost parasitical when these companies come in.”

Several dozen anti-Castro protesters along with the Ladies in White, the dissident group formed in 2013 by the wives of political prisoners, were arrested by Cuban police, pushed into vans and driven off.

They protested in Havana’s Santa Rita Park, next to the church where the Ladies in White lead their peaceful protest every Sunday.

Other dissidents chanted: “Obama, Cuba has a dream; Obama, Cuba without Castro,” as the media from around the globe swarmed them.

“We welcome him here but there is not going to be any change until the Castro government falls,” one of the ladies, Lucina Gonzalez Gomez (54) told The Irish Times, marching peacefully down a street before her arrest.

Antonio Rodiles (43), a Cuban political activist pushing for a more democratic society, has been arrested 50 times in the past year and has had his nose broken and eardrum burst by the secret Cuban police, he said.

“It is not a good idea for Obama to come here without preconditions,” he said.

“President Obama still has the opportunity to change the direction of this political process because until this moment the regime is the one that is taken advantage of all of this process.”