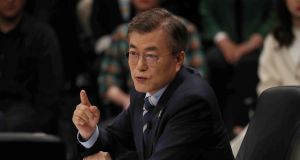 Moon Jae-in, the front-runner in South Korea’s presidential election, has indicated that if North Korea is willing to negotiate its denuclearisation and set the stage for talks, South Korea could consider resuming joint projects. Photograph: Yonhap via Reuters

South Korea has urged North Korean cadres not to drive off in cars parked at the Kaesong industrial complex, a cross-border joint venture on North Korean soil employing workers from the North, which closed in February 2016 after North Korean nuclear and missile tests.

Satellite imagery seems to show that more than 100 South Korean cars parked at the complex have recently vanished, raising the possibility that North Korea may have transported them somewhere.

Kaesong was set up as a symbol of Korean reconciliation and a possible blueprint for cross-border co-operation but it has been opened and closed repeatedly as ties on the peninsula ebb and flow.

At one point, 124 South Korean firms were located in the Kaesong complex, employing 53,000 North Koreans to produce labour-intensive goods such as clothing and tools.

Seoul’s unification ministry, which handles North Korean matters, said the cars were the property of South Korean businessmen and North Korea wasn’t allowed to use them, and certainly not “arbitrarily”.

“All remaining cars at the factory park belong to South Korean businessmen. North Korea should immediately stop using those vehicles without our authorisation as the move is clearly an illegal act that violates local firms’ property rights,” Lee Eugene, a ministry spokesperson, was quoted as saying by Yonhap news agency. The ministry said the position of the vehicles had changed, but it cannot say where or why.

In February, the ministry allegedly spotted attempts by North Korean cadres to remove electric appliances such as rice cookers from the complex to sell.

Tensions have been running high on the Korean Peninsula, which is divided by a demilitarised zone marking the buffer between North and South since the end of the Korean War in 1953.

North Korea has indicated that it may conduct a nuclear or long-range missile test, while South Korea’s allies the United States have a nuclear strike force near the region to cope with increasingly bellicose language from Pyongyang.

South Korea goes to the polls on May 9th and presidential front-runner Moon Jae-in has indicated that if Pyongyang is willing to negotiate its denuclearisation and set the stage for talks, South Korea could consider resuming joint projects such as Kaesong, which provided valuable foreign currency for Kim Jong-un’s government.

Seoul is clearly worried about unscrupulous North Koreans selling the cars across the border, and said it had asked China to tell its people to not buy unsourced items from the industry park if North Koreans tried to sell them.