Republicans pull out all the stops in Iowa ahead of caucuses

From baby-cooing to ‘Top Gun’-style fly-bys, candidates do their best to impress voters

Ahead of the Iowa caucus, the first ballot in the US presidential election, attendees at a rally at Dubuque Regional Airport in eastern Iowa explain what draws them to Republican candidate Donald Trump. Video: Simon Carswell/Reuters 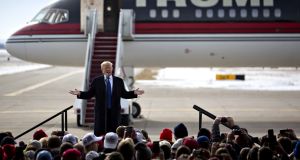 Donald Trump speaks during a campaign rally at Dubuque Airport in Iowa, on Saturday: the presidential candidate staged a fly-by in his red and black Boeing 757, dubbed “Trump Force One”, before landing. Photograph: Andrew Harrer/Bloomberg

Abraham Sheffield stands in a large function room of the University of Iowa’s university club, cradling his restless 16-week-old son as his other twin sleeps soundly nearby.

It’s early on Saturday in Iowa City, and Sheffield and his wife are here to listen to Chris Christie, the Republican governor of New Jersey, speak at a “town hall” meeting and answer questions from voters who will pick presidential nominees in Monday night’s Iowa caucuses.

In this midwestern state, retail politics is a family affair as candidates worked rooms right across the state over the weekend in the final frenetic stretch to the first ballot of this year’s presidential election.

Christie’s meeting was the first of four on his schedule for the day. It was one of more than 50 events that day attended by 10 Republicans and three Democrats hoping to win – or at least score a respectable finish in – the inaugural contest that will winnow this large field.

Iowans had a further 38 opportunities on Sunday to see the candidates perform their final stump somersaults to impress voters.

All but one of the Republican candidates was in Iowa over the weekend. Ohio governor John Kasich, a Republican, stayed in New Hampshire where he is concentrating his efforts in the hope of a strong placing in the second test of this election on February 9th.

“I haven’t made my mind up yet,” said Sheffield (36), placing his son’s soother back in his mouth to stop him crying. “I have always liked Christie’s frankness – like his sign says, he says it like it is.”

The Republican governor is warm, personable and engaging for the 40 minutes he holds the room, belying like the brash, tough-talking persona. He even managed a photo with the Sheffields and their twins afterwards.

When it comes to the other candidates, the New Jersey politician is a little different – he’s fighting tough. He has to be. He is polling sixth nationally and a place further back in Iowa.

At the Iowa City town hall, Christie lashed rivals senators Ted Cruz of Texas and Marco Rubio of Florida, who are second and third respectfully in the polls. He is challenging them in the contest to be the electable alternative to Donald Trump, the party’s surprise front-runner.

Reminding voters of last week’s debate and how the two senators tried to deny their pivots on immigration, Christie said that if they were not telling the truth on that, what else would they lie about?

“If they are not telling the truth on that debate stage, what is going to happen when they become president of the United States and man, the fur really starts to fly?” he said.

Baby-cooing and glad-handing may be the stock and trade of career politicians, but a 90-minute drive away in Dubuque, Trump pulled off another unconventional stunt typical of his upstart campaign.

He staged a fly-by of several hundred people gathered in an airport hangar, screaming past in his red and black Boeing 757, dubbed “Trump Force One” by his campaign team. A stirring fanfare playing over the speakers couldn’t drown out the crowd’s “oohs” and “aahs” as the plane soared past the people just a few hundred feet off the ground.

“Here he comes!” shouted one man, as the plane approached and every smartphone in the hangar was raised above heads.

Trump knows how to make an entrance. This was Trump’s Top Gun moment, the businessman confirming his status as the “Maverick” of the presidential dogfight over Iowa.

Bounding down the steps of his own plane alone, Trump presented the winning strongman image he has cultivated throughout his garish, narcissistic campaign. If the association had not been made in people’s minds seeing his arrival, the billionaire entertainment mogul laid it out for his star-struck audience when he took the microphone.

Trump chided Barack Obama for commissioning a costly new Air Force One, jabbing the president for flying to Hawaii at Christmas to play golf for “two or three weeks”and for the damaging carbon footprint left by an “old 747” on the environment, “if you believe in that to start with.”

“The United States has just ordered a three billion dollar plane, three billion! Do you think I could have made a better deal than that?!” he asked. He got back a chorus of yeahs.

Trump, fulfilling a promise in his stump speech, later allowed children in the hangar to “run through” his plane, like Daddy Warbucks trying to dazzle a state full of Annies.

“I think he is going to win the nomination because he is a jerk,” said one unimpressed Dubuque man who didn’t want to give his name.

“It’s like, look at my toy – you will never have it,” said the man, originally from eastern Europe, pointing to the plane. “It’s tragic.”

Others are bowled over by Trump.

In contrast to one of Trump’s most ostentatious moments of the campaign, his rivals tried to show their human sides over the weekend.

Near Des Moines, Rubio, the Republican’s fresh-young-thing candidate, joked about free bars given the number young voters present at his packed rally in Urbandale on Saturday evening. He poked fun at hog-rearing Iowa for having just six vegetarians and Democratic candidate Bernie Sanders for being a better leader for Sweden that the United States.

The night before, in the remote town of Wilton, Heidi Cruz, wife of Ted, tried to counter the monstrous image that Trump has presented of her husband (“a nasty guy that everybody dislikes”).

“He is the most thoughtful, loving, low-key, easy person to be around that you will ever meet,” she told a crowd. “When he comes home, he lays on the floor and plays bingo with the girls.”

Ted responded with lovey-dovey compliments of his Goldman Sachs executive wife that would have made even Trump blush.