Donald Trump and Marco Rubio clash during a Reoublican debate in Detroit, with the businessman defending the size of his hands. Video: Fox News 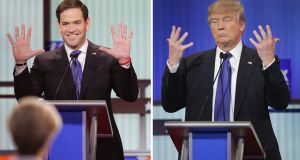 “Look at those hands. Are they small hands?”

The eleventh Republican presidential debate descended into a blizzard of insults with Donald Trump even going so far as to defend himself from ridicule by saying there was “no problem” with the size of his manhood.

If past debates degenerated into something closer to schoolyard rows, the first debate after Mr Trump’s “Super Tuesday” sweep of seven state victories sunk to a new low with talk more suited to a men’s locker-room.

The Fox News debate took a bizarre turn as Mr Trump was subjected to fierce attacks by trailing candidates, senator Ted Cruz of Texas and Marco Rubio of Florida, as they fight to keep their campaigns alive and halt a surging Mr Trump who has won 10 of the first 15 state contests.

In what must be the first reference to a candidate’s private parts on a US presidential debate stage, the billionaire showed again that there was no subject considered off limits in his outsider campaign.

The topic of the Mr Trump’s appendage arose when Mr Rubio was asked why he had engaged in personal attacks on him in recent days - making fun of his alleged fake tan and his spelling, and suggesting he wet himself at the last debate - when he said he wouldn’t.

“Donald Trump has basically mocked everyone,” Mr Rubio, running third in the race, told Fox News anchor Brett Baier. “If there’s anyone who has ever deserved to be treated that way, it was Donald Trump.”

The businessman, in response, admitted he had called the 44-year-old senator “a lightweight” and said that he would “like to take that back” before he moved the discussion on to parts of his anatomy.

“I have to say this: he hit my hands,” the entertainment mogul said of Mr Rubio’s campaign trail joke about Mr Trump’s “small hands”.

The startled Fox News moderators moved the debate quickly on.

The event, held in Detroit four days before Michigan votes in a primary, was, like the last debate, dominated by name-calling as Mr Rubio and Mr Cruz attacked the businessman on being untrustworthy, his business failures and his past ties to the Democratic Party.

When Mr Rubio pushed Mr Trump to answer a question on policy, the businessman responded: “Don’t worry about it little Marco, I will,” repeating one of his preferred digs against him from the campaign trail.

“Don’t worry about it, little Marco,” Mr Trump shot back.

Fox moderator Chris Wallace implored the two candidates to rise above the petty insults: “Gentlemen, you have got to do better than this.”

Mr Rubio was not the only candidate out of the four remaining contenders in the Republican race to tussle with Mr Trump.

The businessman accused Mr Cruz of being the “strongest” supporter of the Supreme Court nomination of chief justice John Roberts, a conservative judge that many Republican feel betrayed them by voting for president Barack Obama’s signature healthcare law.

“You know, Donald has a tenuous relationship with the truth,” said the Texas senator.

When Mr Trump interrupted him as he defended a newspaper opinion article he wrote supporting Mr Roberts, Mr Cruz tried to stop him with calming noises, saying: “Breathe, breathe, breathe.”

“When they’re done with the yoga, can I answer a question?” said Mr Rubio, interjecting.

“I really hope that we don’t see yoga on this stage,” said the Texan.

“Well, he’s very flexible, so you never know,” said the Florida senator in reply, pointing to Mr Trump in a dig at the businessman’s position on immigration policy that featured in an earlier discussion in the debate.

Mr Rubio and Mr Cruz, requiring much-needed wins in state nominating contests this month, repeatedly challenged Mr Trump to release a transcript of his off-the-record meeting with the New York Times editorial board from earlier this year. He reportedly said in the meeting that he was willing to soften his hardline position on immigration.

The businessman said that he would “never release off-the-record conversations” because he didn’t think it was fair.

“All right. Let’s leave it at that,” said Fox moderator Megyn Kelly as the debate moved on to another topic.

The next Republicans to chose the party nominee to stand in November’s presidential election will be voters in Kansas, Kentucky, Louisiana and Maine on Saturday.