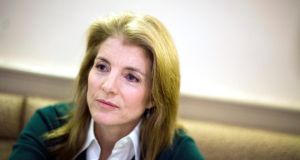 Caroline Kennedy: the assignment would vault her into the kind of public life that her father and uncles pursued for decades. Photograph: Todd Heisler/The New York Times

President Barack Obama plans to name Caroline Kennedy, the daughter of the late President John F Kennedy, as the next US ambassador to Japan, according to a person familiar with the matter.

While Ms Kennedy has agreed to the posting and the president has settled on her as his choice, an announcement isn’t expected until later this month, said the person, who requested anonymity. Ms Kennedy (55) would replace John Roos, a former technology lawyer and Obama campaign donor, as the envoy in Tokyo.

An early backer of Mr Obama in his 2008 run for president and a co-chairman of his 2012 campaign, Ms Kennedy is one of several political supporters and donors being reviewed for ambassadorships to top US allies. She would be the first woman to serve as American envoy to Japan.


Deepen friendship
Japanese chief cabinet secretary Yoshihide Suga yesterday said his government hadn’t been informed of any appointment. “Former president Kennedy was very familiar to the Japanese, so we are watching to see if such an appointment will be made,” he said. “Such an appointment would be much talked about and it would deepen our friendship.” – (Bloomberg)