Police use pepper spray at Donald Trump rally in Kansas

Secret Service agents rush to protect Donald Trump as a protester attempts to climb on stage during a rally in Vandalia, Ohio. Video: Reuters 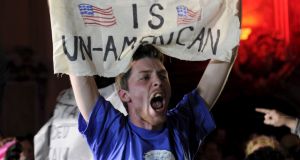 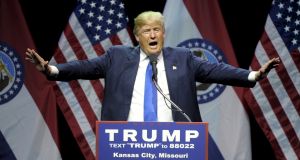 Police used pepper spray twice outside a Donald Trump rally in Missouri and made two arrests as violent protests continued to dog the Republican presidential front-runner.

Kansas City police did not say if the use of pepper spray was on demonstrators or Trump supporters. Television images showed one protester rubbing his eyes and saying that he had been sprayed.

As a boisterous group of protesters gathered outside the theatre where Mr Trump spoke in Kansas City, the event concluded without significant incident. Police say the majority of people exercised their rights to gather peacefully.

Mr Trump’s remarks were interrupted about a dozen times by protesters who managed to get into the theatre and they were escorted out.

The billionaire businessman, who called off a planned Chicago event because it attracted so many protesters, had asked police to arrest protesters in Kansas City, saying fear of an “arrest mark” on people’s records may put an end to the near-constant disruptions at his rallies.

He also blamed Democrat contender Bernie Sanders’ supporters for trouble at his rallies, referring to the left-wing Vermont politician as “Bernie our communist friend” and calling him a “lousy” senator.

Some signs for Mr Sanders have appeared at the protests but there is no indication of an organised effort from his Democratic campaign to undermine Mr Trump or that Mr Sanders’ supporters were dominating the demonstrations. Mr Trump said he had seen some Hillary Clinton signs too.

As protesters made their mark in Kansas City, Mr Trump seemed to relish the interruptions.

He repeatedly ridiculed them as people with a “little weak voice”, saying: “Go home to mommy.” Even while stirring up his boisterous supporters, he asked security to be “very gentle” when taking the protesters out.

About 20 minutes into his remarks, more than a dozen demonstrators were escorted out, offering little resistance.

Mr Trump was eager to engage them, saying: “There is nothing so interesting as a Trump rally.”

Republican National Committee chairman Reince Priebus said that with the world watching the US presidential election, political leaders in both parties had a responsibility to ensure that the “discourse we engage in promotes the best of America”.

Mr Priebus never mentioned Mr Trump by name and focused his comments on leaders in both parties, saying he hoped voters could exercise their First Amendment rights in a manner “that is respectful of our fellow Americans”.

He added that violence “is never the answer”.

Meanwhile Marco Rubio was the victor in the Republican caucuses in Washington DC, the third presidential contest victory for the Florida senator after wins in the Minnesota caucuses and the Puerto Rico primary.

He picked up 10 delegates with his Washington win, with nine delegates for runner-up Ohio governor John Kasich, who was just 50 votes behind.

None of the other candidates in the race won enough votes to earn any delegates.

On the Democrat front, Mrs Clinton again apologised for crediting Nancy Reagan for confronting the Aids epidemic in the 1980s. The former US secretary of state initially apologised on Friday after saying in an interview with MSNBC during its coverage of Mrs Reagan’s funeral that the former first lady helped start a “national conversation” about Aids.

Writing on the Medium website, Mrs Clinton said on Saturday that the Reagans did not do so and she instead credited the work of gay, lesbian and bisexual activists and their straight allies.

“I’ve heard from countless people who were devastated by the loss of friends and loved ones, and hurt and disappointed by what I said,” she wrote.

Mrs Clinton added that there was still “work to do to eradicate this disease for good and erase the stigma”.

Earlier she picked up more superdelegates after winning the Northern Mariana Islands caucus.

All five of the superdelegates in the Pacific Ocean US territory near Guam are now supporting her over Mr Sanders. Up to now, only one of them had endorsed Mrs Clinton while the others were uncommitted.

Superdelegates are party officials who can back any candidate they wish.

Mrs Clinton gained four delegates to Mr Sanders’ two, based on the caucus results. When including superdelegates, she maintains a big delegate lead over Mr Sanders, 1,231 to 576. It takes 2,383 delegates to win the nomination.