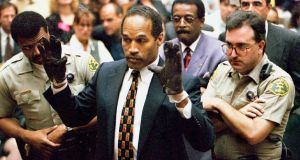 OJ Simpson holds up his hands to the jury showing leather gloves that prosecutors say he wore the night of the murders of his ex-wife Nicole Brown Simpson and Ron Goldman during his trial in Los Angeles in a 1995 file photograph. Photograph: Sam Mircovich/Reuters

Los Angeles police said on Friday they were conducting tests on a knife that was claimed to be found on a property owned by athlete OJ Simpson.

It is claimed the knife was discovered at the time he was accused and later acquitted of two murders 21 years ago.

The house, in the upscale Brentwood neighbourhood of Los Angeles, has since been razed.

LAPD spokesman Andrew Neiman said the knife was turned over in the last month by a retired police officer who said he obtained it from someone working on a construction site at the property.

Mr Neiman said the knife would be tested for DNA evidence, but added it was possible that “the whole story is bogus from the get-go.”

Mr Neiman declined to name the retired police officer or to say why the knife had only come to light last month.

Simpson was found not guilty in October 1995 in the deaths of Nicole Brown Simpson and Ronald L Goldman, who were slashed to death in the front yard of Nicole Simpson’s home. The murder weapon was never found at the time of the nine-month trial that ended in 1995 with Simpson’s acquittal.

Simpson cannot be prosecuted again for the two murders due to the double jeopardy rule.

In 2008, Simpson, a Pro Football Hall of Famer, was sentenced to at least nine years in a Nevada prison stemming from an episode in which he stole a trove of sports memorabilia worth thousands of dollars from two dealers in collectibles.