Obama to a tee: my speech for the president

Opinion: be a player on the world stage? I’d rather play golf, says our leader 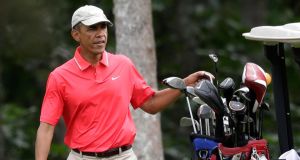 Fore! Score? And seven trillion rounds ago, our forecaddies brought forth on this continent a new playground, conceived by Robert Trent Jones, and dedicated to the proposition that all men are created equal when it comes to spending as much time on the links as possible – even when it seems totally inappropriate, like moments after making a solemn statement condemning the grisly murder of a 40-year-old American journalist beheaded by the Islamic State.

I know reporters didn’t get a chance to ask questions, but I had to bounce. I had a 1pm tee time at Vineyard Golf Club with Alonzo Mourning and a part-owner of the Boston Celtics. Hillary and I agreed when we partied with Vernon Jordan up here, hanging out with celebrities and rich folks is fun.

Now we are engaged in a great civil divide in Ferguson, which does not even have a golf course, and that’s why I had a “logistical” issue with going there. We are testing whether that community, or any community so conceived and so dedicated, can long endure when the nation’s leader wants nothing more than to sink a birdie putt.

We are met on a great field of that battle, not Augusta, not Pebble Beach, not Bethpage Black, not Burning Tree, but Farm Neck Golf Club in Martha’s Vineyard, which we can’t get enough of – me, Alonzo, Ray Allen and Marvin Nicholson, my trip director and favourite golfing partner who has played 134 rounds and counting with me.

I know it doesn’t look good to have pictures of me grinning in a golf cart juxtaposed with ones of James Foley’s parents crying, and a distraught David Cameron rushing back from his vacation after only one day, and the Pentagon news conference with Chuck Hagel and Gen Dempsey on the failed mission to rescue the hostages in Syria.

We’re stuck in the rough, going to war all over again in Iraq and maybe striking Syria, too. Every time Chuck says the Islamic State is “beyond anything we’ve ever seen”, I sprout seven more gray hairs. But my cool golf caps cover them. If only I could just play through the rest of my presidency.

The Islamic State is brutally killing hostages because we won’t pay ransoms, rumbles of coups with our puppets in Iraq and Afghanistan, the racial caldron in Ferguson, the Ebola outbreak, the Putin freak-out – there’s enough awful stuff going on to give anyone the yips.

So how can you blame me for wanting to unwind on the course or for five hours at dinner with my former assistant chef?

The world will little note, nor long remember, what we shot here, or why I haven’t invited a bunch of tiresome congressmen to tee it up. I’m trying to relax, guys. So I’d much rather stay in the bunker with my usual bros. Why don’t you play 18 with Mitch McConnell? And John Boehner is a lot better than me, so I don’t want to play with him. It is for us duffers, rather, to be dedicated here to the unfinished work which they who played here have thus far so nobly advanced to get young folks to stop spurning a game they find slow and boring.

It is rather for us to be here dedicated to the great task remaining before us of getting rid of our slice on the public’s dime – that from this honoured green we take increased devotion to that cause for which Bobby Jones, Jack Nicklaus, Tiger Woods and Rory McIlroy gave their last full measure of devotion – and divots.

We here highly resolve that these golfing greats shall not have competed in vain, especially poor Tiger, and that this nation, under par, shall have a new birth of freedom to play the game that I have become unnaturally obsessed with, and that golf of the people, by the people, for the people shall not perish from the earth. So help me Golf.