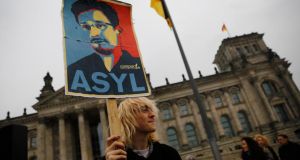 A protester holds a placard calling for Germany to give political asylum to the fugitive former US spy agency contractor Edward Snowden, outside the seat of the lower house of parliament, the Bundestag in Berlin last month. Photograph: Thomas Peter/Reuters

National Security Agency officials are considering a controversial amnesty that would return Edward Snowden to the United States, in exchange for the extensive document trove the whistleblower took from the agency.

An amnesty, which does not have the support of the State Department, would represent a surprising denouement to an international drama that has lasted half a year. It is particularly unexpected from a surveillance agency that has spent months insisting that Mr Snowden’s disclosures have caused vast damage to US national security.

The NSA official in charge of assessing the alleged damage caused by Mr Snowden’s leaks, Richard Ledgett, told CBS News an amnesty still remains controversial within the agency, which has spent the past six months defending itself against a global outcry and legislative and executive proposals to restrain its broad surveillance activities.

“My personal view is, yes, it’s worth having a conversation about,” Mr Ledgett, who is under consideration to become the agency’s top civilian, said in an interview due to air yeterday on 60 Minutes. “I would need assurances that the remainder of the data could be secured, and my bar for those assurances would be very high. It would be more than just an assertion on his part.”

Any amnesty would have to come through the Justice Department, which did not respond to a request for comment.

The NSA’s director, General Keith Alexander, told CBS that granting Mr Snowden amnesty would reward the leaks and potentially incentivise future ones. But Gen Alexander is retiring in the spring, joining his civilian deputy John C Inglis, and Mr Ledgett is rumored to be a top candidate to replace Mr Inglis.

“Our position has not changed,” Ms Harf said. “Mr Snowden is facing very serious charges and should return to the United States to face them.”

“I wouldn’t do it. That simply motivates future Snowdens,” said Gen Hayden, who began the bulk collection of Americans’ phone and internet metadata in 2001 as a response to 9/11 that was initially unknown and unauthorised by Congress and the courts.

But Gen Hayden also said that Mr Snowden had kickstarted an important debate in the US about the appropriate balance between liberty and security.

“Snowden was important. He accelerated a debate, he misshaped the debate, but the debate was coming,” Gen Hayden said, on NBC.

Mr Snowden told the New York Times in October that he divested himself of the documents before leaving Hong Kong for Russia, which he suggested was a preventive measure to keep the documents out of the hands of Russian intelligence. Lack of access to the documents, which are now in the hands of journalists, would likely complicate the “assurances” Mr Ledgett indicated the government would require for any amnesty.

The NSA does not believe that Mr Snowden’s documents have escaped the collection capabilities of its Russian and Chinese counterparts; a senior official told the New York Times on Saturday that the government may never know how much material Mr Snowden took from the agency.

The Guardian continues to publish surveillance stories based on Mr Snowden’s leaks, as do the Washington Post and other news organisations around the world, aided by the former Guardian journalist Glenn Greenwald and Laura Poitras, the two journalists who maintain possession of the entire Snowden data trove.

Mr Ledgett told Reuters that the NSA is worried about the large majority of documents the agency believes to have been taken by Snowden that news organizations have not yet published.

Whether or not Mr Snowden returns to the US a free man, the Obama administration continues to grapple with the aftershocks of his disclosures. Mr Ledgett and other NSA officials have said that the agency is instituting new technical initiatives to prevent new Snowdens by increasing internal data security. Alexander testified last Wednesday that the agency would soon detail those to Congress, but he said they included “compartmentalising and encrypting data”.

However, NSA officials conceded in interviews that by the time of Mr Snowden’s leaks, they had yet to fully implement data-security promises the government pledged to institute after the 2010 leaks of war logs and diplomatic cables by the Army private Chelsea Manning.

On Friday, a review group created by the White House provided President Barack Obama with a report recommending 40 potential surveillance reforms. National Security Council spokeswoman Caitlin Hayden said the administration would spend “several weeks” assessing which to implement, and would make the report public in January.

The White House has already rejected one proposed initiative, which would divorce the NSA from the military’s Cyber Command, which protects US military data networks and attacks those of adversaries. Civil liberties groups have already attacked the review group’s reported proposals as cosmetic.

“The proposed recommendations from the Review Group do not go far enough,” said Alan Butler, a lawyer for the Electronic Privacy Information Center. “Bulk collection of personal data should simply end. And meaningful constraints on the NSA should be re-established. The purpose of FISA was to allow for electronic surveillance of foreign targets for foreign intelligence purposes, and the current framework of bulk domestic collection is upside down.”

Beyond the review group, privacy advocates in Congress are pushing a bill, the USA Freedom Act, that would prevent the government from collecting Americans’ phone and other data in bulk without court-authorised and individualised suspicion of wrongdoing. The USA Freedom Act has yet to clear any of its relevant committees in the House and Senate, but supporters claim 120 co-sponsors in the legislature.

The 60 Minutes interview is part of an NSA initiative to rebuild its reputation through increased public engagement. This week, the sympathetic blog Lawfare will air a series of podcasted interviews with NSA leaders. Senior NSA officials have also been making appearances on college campuses to argue that their bulk surveillance activities are necessary for national security and not intrusive on Americans’ privacy.